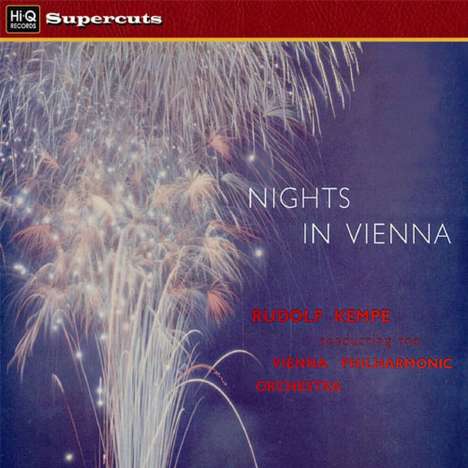 "Rudolf Kempe has the true and significant gift of the truly great conductor. He is able and willing to lavish the same care and affection on good light music as on that of the supreme masters." So enthused W. A. Chislett on the 48 years old Kempe, who, by the time this recording of operatic overtures and waltzes was made, had gained a reputation as an opera conductor, having directed the Dresden Opera, the Vienna State Opera, the Bavarian State Opera (succeeding Solti) and conducted at Bayreuth. He was a favourite at Covent Garden but declined the director's job. Kempe was a conductor of international repute, with long associations with the Royal Philharmonic, Zurich Tonhalle and Munich Philharmonic, as well as his last, short-lived appointment as chief conductor of the BBC Symphony Orchestra. Kempe died on 12 May 1976 aged 65.

Cut at Abbey Road Studios from the original stereo analogue master tapes with the Neumann VMS82 lathe fed an analogue pre-cut signal from a specially adapted Studer A80 tape deck with additional 'advance' playback head, making the cut a totally analogue process. Pressed on 180g vinyl to audiophile standards using the original EMI presses by The Vinyl Factory in Hayes, England. Featuring the original album artwork, this recording is not otherwise generally available in any format. It contains rarely heard or recorded pieces by Heuberger and Reznicek.