Mark Padmore - Who are these Children? 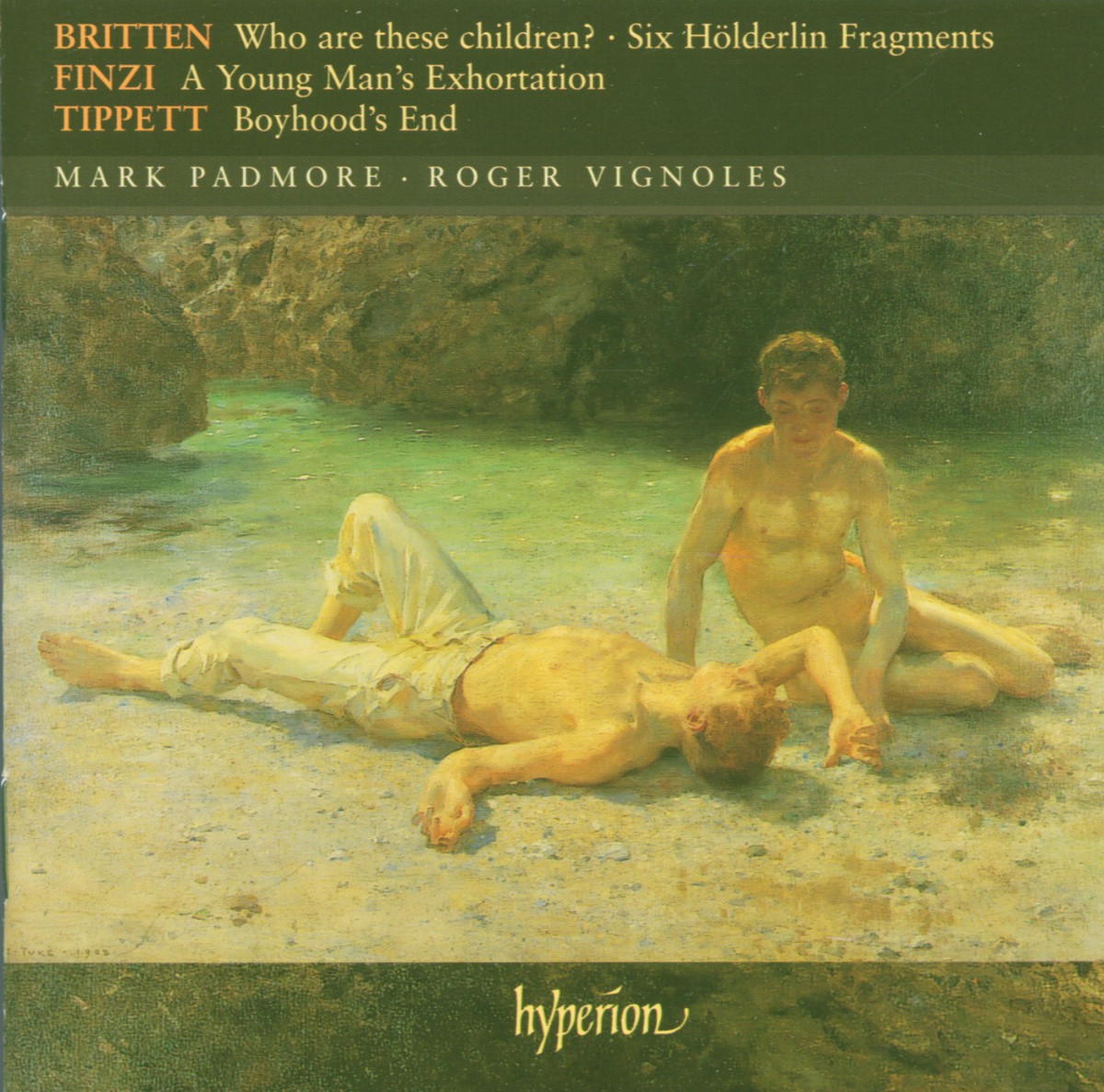 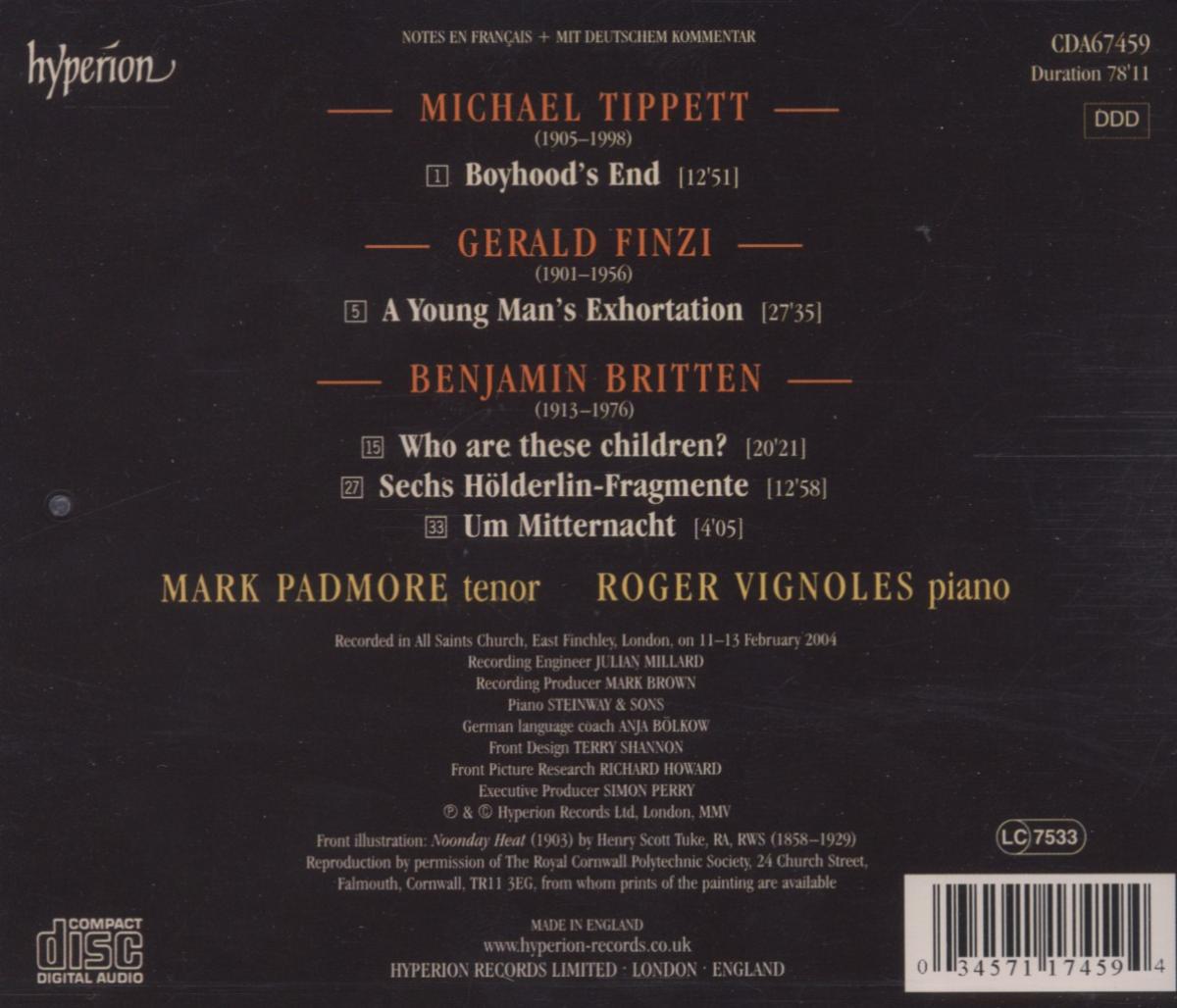 Bewertung:
umgehend lieferbar, Bestand beim Lieferanten vorhanden
EUR 19,99*
Versandkosten
This enthralling new recording from Mark Padmore and Roger Vignoles finds its emotional heart in the theme of youth, and in particular the passage of time inherent in this all-too-transient phase of human existence. Opening with Boyhood’s End by Sir Michael Tippett (whose centenary falls in 2005), we are transported through Gerald Finzi’s wondrous A Young Man’s Exhortation – to the poetry of Thomas Hardy – to three rarely performed works by Benjamin Britten. Who are these children?, twelve songs to words by William Soutar, is a fascinating response to the themes of innocent childhood (the »Scottish« songs) and the tragic loss of this childhood (the »English« songs – written as a reaction to war-time photographs published in 1941). The Sechs Hölderlin-Fragemente have been neglected on the concert platform, not least because they are rare in Britten’s song output as being in German. The music owes something to its composer’s love of the lieder of Hugo Wolf. Um Mitternacht is Britten’s only setting of Goethe. There is some evidence that a cycle was planned, but in the event this single song had to wait till 1994 before it was published as part of the collection A Red Cockatoo & other songs. Roger Vignoles sensitively brings life to the piano accompaniments beneath the ardent tenor of Mark Padmore, as performances and programme combine to create a most satisfying recital.

»This is a remarkable debut recital by one of the most intelligent, musical and thoughtful British singers before the public today. It's not easy listening, but Padmore and Vignoles demonstrate song's unique power to shake, stir ad move. The recorded balance is ideal, but no company is more experienced in the art-song repertoire than Hyperion. Another jewel in an already superlative crown« (International Record Review)

»Mark Padmore and Roger Vignoles perform all these songs with great understanding and sensitivity; in fact I was surprised at how much intensity of feeling they found in the stark Hölderlein songs. Padmore is equally at ease with the minutely expressive wordsetting of the Britten songs and the long, soaring lines of the Tippett« (BBC Music Magazine)

»Sung by Mark Padmore who, on this form and in this repertory, seems to me to be unrivalled among younger English tenors … With Roger Vignoles as the Britten-like pianist, this ranks as one of the finest discs of English songs to have been issued for some years« (Sunday Telegraph)

»This is still a voice of youthful freshness, commanded with skill and assurance. The programme tests his musicianship very thoroughly, and it reveals also considerable powers of expressiveness, both forthright and subtle … Vignoles is marvellously clear in notes (often fiendishly difficult) and rhythm, and he contributes an excellent essay« (Gramophone)

Who are these children op. 84