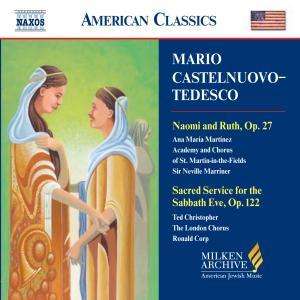 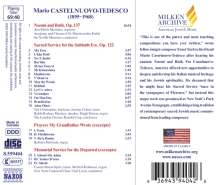 Lieferzeit beträgt mind. 4 Wochen
(soweit verfügbar beim Lieferanten)
EUR 9,99*
Versandkosten
*** Milken Archive of American Jewish Music
»This is one of the purest and most touching compositions you have ever written, « wrote fellow émigré composer Ernst Toch to his friend Mario Castelnuovo-Tedesco after hearing his cantata Naomi and Ruth. For Castelnuovo-Tedesco, America offered new opportunities to deepen and develop his Italian musical heritage and his Jewish spiritulaity. He dreamed that he might hear his Sacred Service »once in the synagogues of Florence«, but instead this major work was premiered at New York's Park Avenue Synagogue, establishing a long tradition of contemporary sacred Jewish music commissioned from leading composers.

Memorial Service for the departed (Auszug)