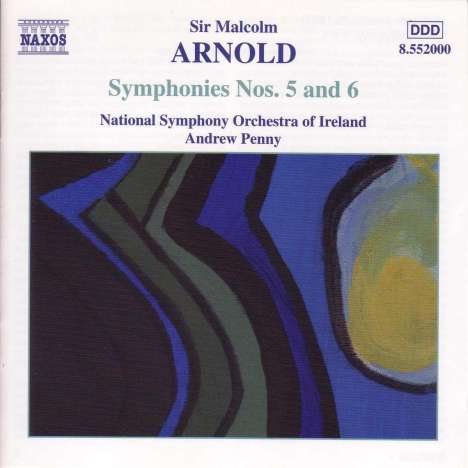 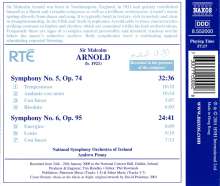 The Third Symphony, written in 1957, had inferred popular musical elements which the Fourth, completed in 1960, was to make explicit; the Fifth Symphony of the following year does not so much close a trilogy as provide a canvas on which the opposing aspects of Arnold’s symphonism can seek resolution of their inherent conflict. It is in this light that Arnold’s comment, in the programme for the Cheltenham première of the Fifth Symphony, that ‘there were so many things I felt still needed to be said musically’, should surely be read.
No one should be fooled by the outwardly orthodox four-movement framework of the Fifth Symphony. The opening Tempestuoso begins with a questioning oboe theme, answered by an ominous tolling motion in brass and tubular bells. A delectable carillon motif calms the atmosphere, then strings take up the oboe theme in fatalistic tones. The tolling now forms a backdrop for a purposeful intensification, leading to a brutal climax. The atmosphere stills in an equivocal mood and a sequence of individual wind entries clouds the direction of the movement, until a jagged outburst indicates a reprise. A wistful horn idea marks a passing tribute to Dennis Brain, one of numerous friends and colleagues commemorated in this work. Brass hammer out an impassioned variant of the tolling motion, collapsing to leave strings and chimes in musing uncertainty.
The jazz influences in the opening Energico of the Sixth Symphony are chosen not for their accessibility, but for their making more fluid Arnold’s melodic writing. Tense, anticipatory gestures, over an irregular bass pattern, set the tone for a movement of unrelieved anxiety. A wide-spanned theme rises up in the strings, only to be attacked by strident off-beat brass and timpani. The cross-cutting of thematic and rhythmic fragments is as resourceful as it is unsettling, while tension never wavers. A potent double crescendo presages the return of the string theme, before the quizzical opening texture closes proceedings in inscrutable fashion.