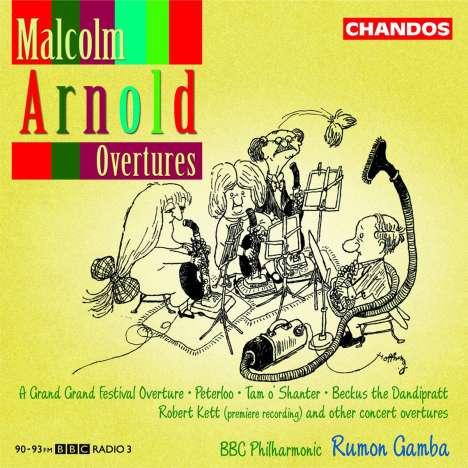 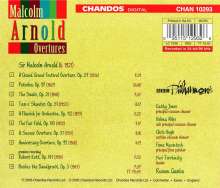 It was the success of Arnold’s first overture, Beckus the Dandipratt (1943), which first brought Arnold’s music to popular attention. Infused with a sense of fun entirely typical of its composer, the comic overture was largely responsible for securing lucrative film work. The Smoke (1943) is a slang term for London. This overture draws on another of Arnold’s early influences: jazz, and in particular, the music of Louis Armstrong. One of the highlights of the 1955 BBC Proms was the premiere of the comic Tam o’Shanter, which narrates Robert Burns’s tale of an alcoholic who sets out from an inn late one stormy night and is pursued by a frenetic orgy of evil spirits. Arnold’s sense of humour came even more prominently to the fore in A Grand Grand Festival Overture (1956), his hilarious contribution to a music festival organised by his friend the cartoonist Gerard Hoffnung. The overture features solo parts for three vacuum cleaners and a floor polisher. A vivid sense of musical drama informs the overture Peterloo, composed in 1967 in response to a commission from the UK’s Trades Union Congress. Always attracted to themes of rebellion, Arnold captures the moments in 1819 when a gathering of Manchester political protestors was brutally quashed by the cavalry. The Anniversary Overture (1968) was written to commemorate the twenty-first anniversary of the Hong Kong Philharmonic Society in 1968; it includes a delicate episode of chinoiserie amongst the ceremonial vigour. The Fair Field (1972), a spirited waltz which metamorphoses into a march, was dedicated to Walton in the year of his seventieth birthday. A Flourish for Orchestra (1973) was composed to commemorate the 500th anniversary of the granting of a charter to the city of Bristol. With Robert Kett (1990), Arnold returned to the theme of revolution by paying homage to a rebel leader executed in themed-sixteen century for his part in causing the siege of Norwich. The work’s rebel drums, buoyant piccolo and heroic brass co-exist with string music that attains a lushness which wouldn’t be out of place in the cinema.

However, Arnold’s many fans will no doubt relish the whole programme, including the first recording of the 1990 ‘Robert Kett’ Overture. And these are lively, well-recorded performances, with an outstanding contribution from the BBC Philharmonic brass. BBC Music Magazine

Arnold’s genius was particularly suited to small-scale orchestral works and every one of these examples shows his orchestral personality at its exuberant best… The other works bring inventiveness and similarly brilliant scoring… All are most entertaining, and marvellously played; you’ll be glad to know that the ‘players’ of the vacuum cleaners and the floor polishers get a credit. The Chandos recording is of the demonstration class. Gramophone

Rumon Gamba and the BBC Philharmonic plow through these items with élan and confidence, producing consistent solidity of tone and unerring precision of ensemble. Chandos’ sound is admirably blended and highly sensitive to textural values. Fanfare (USA)

Arnold is arguably Britain’s greatest living composer, and certainly one of the most prolific. He also has a wicked sense of humour as shown in A Grand Grand Festival Overture, which features three vacuum cleaners and a floor polisher. This splendid CD includes the famous Tam O’Shanter and Peterloo overtures, and Beckus the Dandipratt. There’s also a premiere recording of what must be one of his last pieces, Robert Kett, from 1990. Classic FM Magazine