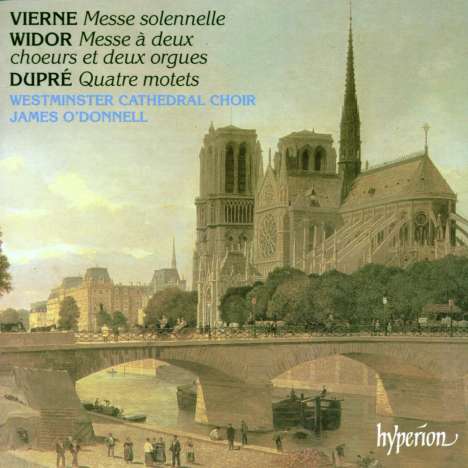 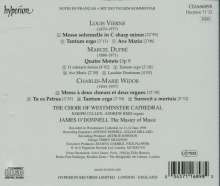 Three charismatic French giants of the organ: Widor, who would hold »salon« parties in his organ loft; Vierne, so committed to his art that he continued to perform literally to the end, dying mid-recital in Notre-Dame; and Dupré, of whom it was declared »He will be an organist« even as he lay in his cradle.

The achievements of these men in the world of sacred choral music are impressive. All of the music on this fantastic recording was originally composed for performance in the church of St-Sulpice, »one of the noblest structures in Paris«, the place which inspired Vierne and Widor to write their awesome Mass settings. Both works call upon two organs, the grand orgue being employed at times to devastating effect. Widor also uses a second choir, the 200 or so Seminarians from the adjoining school. All is reproduced here to create a startling result.

Also recorded are various motets, including the rarely performed set of Quatre Motets by Dupré, which includes the decidedly uninhibited Laudate Dominum.

»There can be little doubt that this release will be one of the recordings of the year and my obeisance goes to all artists involved with this outstanding production« (Soundscapes, Australia)