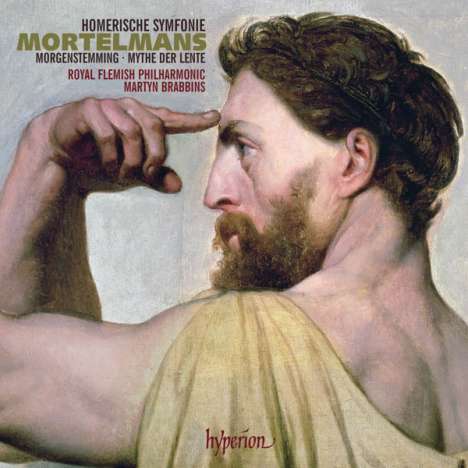 Flemish music has a rather unusual position in the history of nineteenth-century music, in that orchestral and symphonic music were almost completely subordinated to vocal music. There was little expertise in instrumental music, and this concentration on vocal works (which was seen as part of an inherited French culture) got in the way of the development of an orchestral tradition. However, occasionally a figure would appear who broke the mould. Lodewijk Mortelmans (1868–1952) was one of those responsible for the Flemish orchestral renaissance, and who looked with curiosity beyond the Belgian borders. He won the Prix de Rome in 1893, and used the prize money to travel to Germany and Italy to broaden his cultural experience. As a music correspondent he wrote about performances in Bayreuth and kept his finger on the pulse of European musical life. He wished to create an autonomous, ‘Flemish’ symphonic culture, while also appealing beyond its boundaries by choosing ‘extramusical’ subjects with a more universal agenda than Flemish nationalist topics.

One cannot accuse Mortelmans of being musically avant-garde or adventurous: he was aware that European classical music was following a new, atonal and even serial path, but right up to his death he was unwilling to abandon his romantic signature. But he perfected his traditional approach and his music is deeply attractive, showing the influence of both Sibelius and Wagner. A selection of his greatest works for orchestra are recorded here. Hyperion regular Martyn Brabbins conducts the Royal Flemish Philharmonic in their first recording for Hyperion.

'If all three works pay tribute to Wagner in terms of musical landscape, they still have a voice of their own - and a pleasingly sonorous voice at that' (Scotland on Sunday)

'If you have a warm place in your heart for Glazunov then this new name should be right up your street. This to me completely unfamiliar music is presented with real style by Hyperion, by Brabbins and his orchestra and by the liner-note writer Tom Janssens' (MusicWeb. com)

'Lush, melodic and romantic … The excellent Martyn Brabbins and the Royal Flemish Philharmonic have resurrrected the Wagnerian-Straussian tone poems … As for the grand, rhapsodic 'Homeric' Symphony, it's epic' (The Observer)