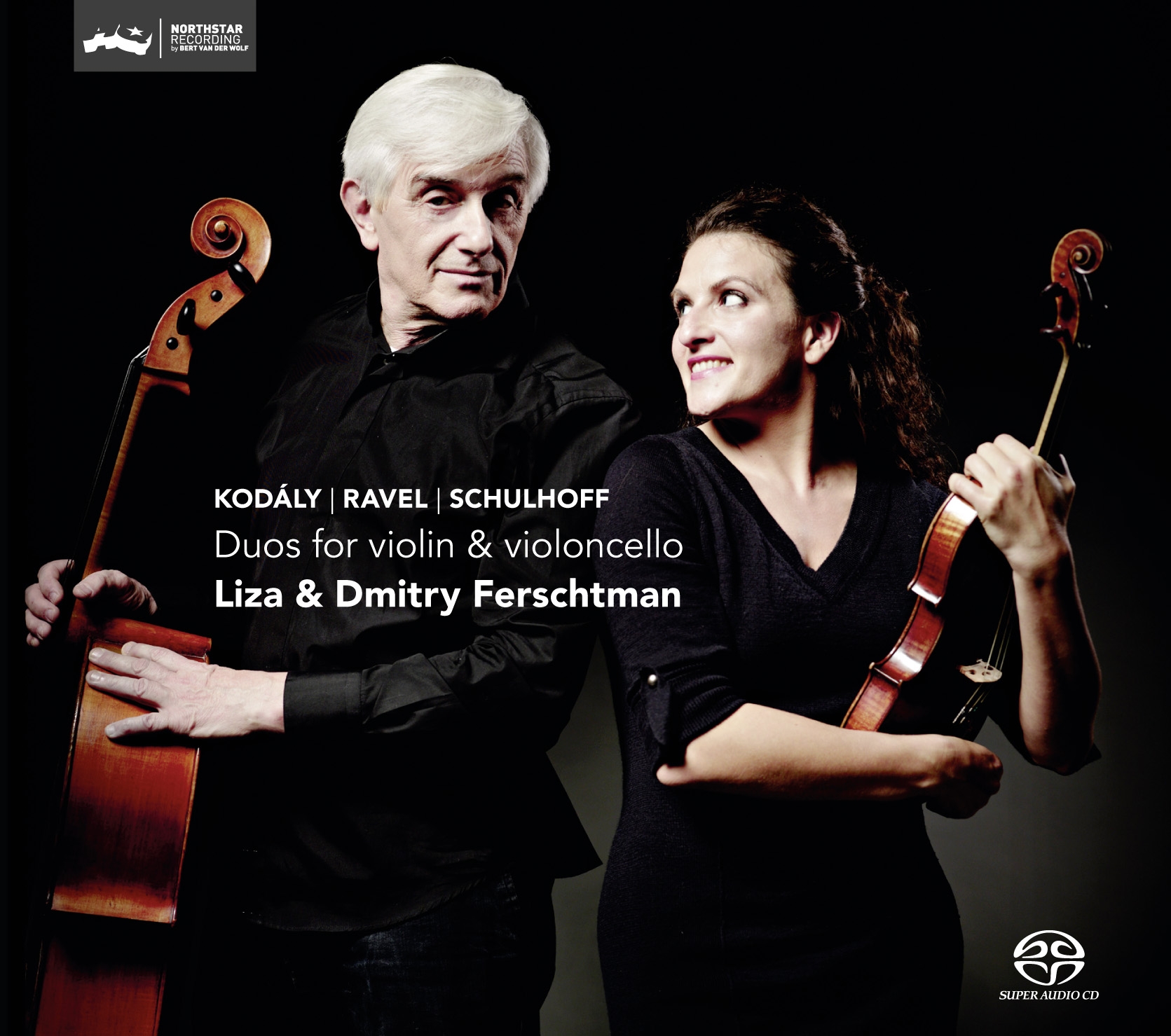 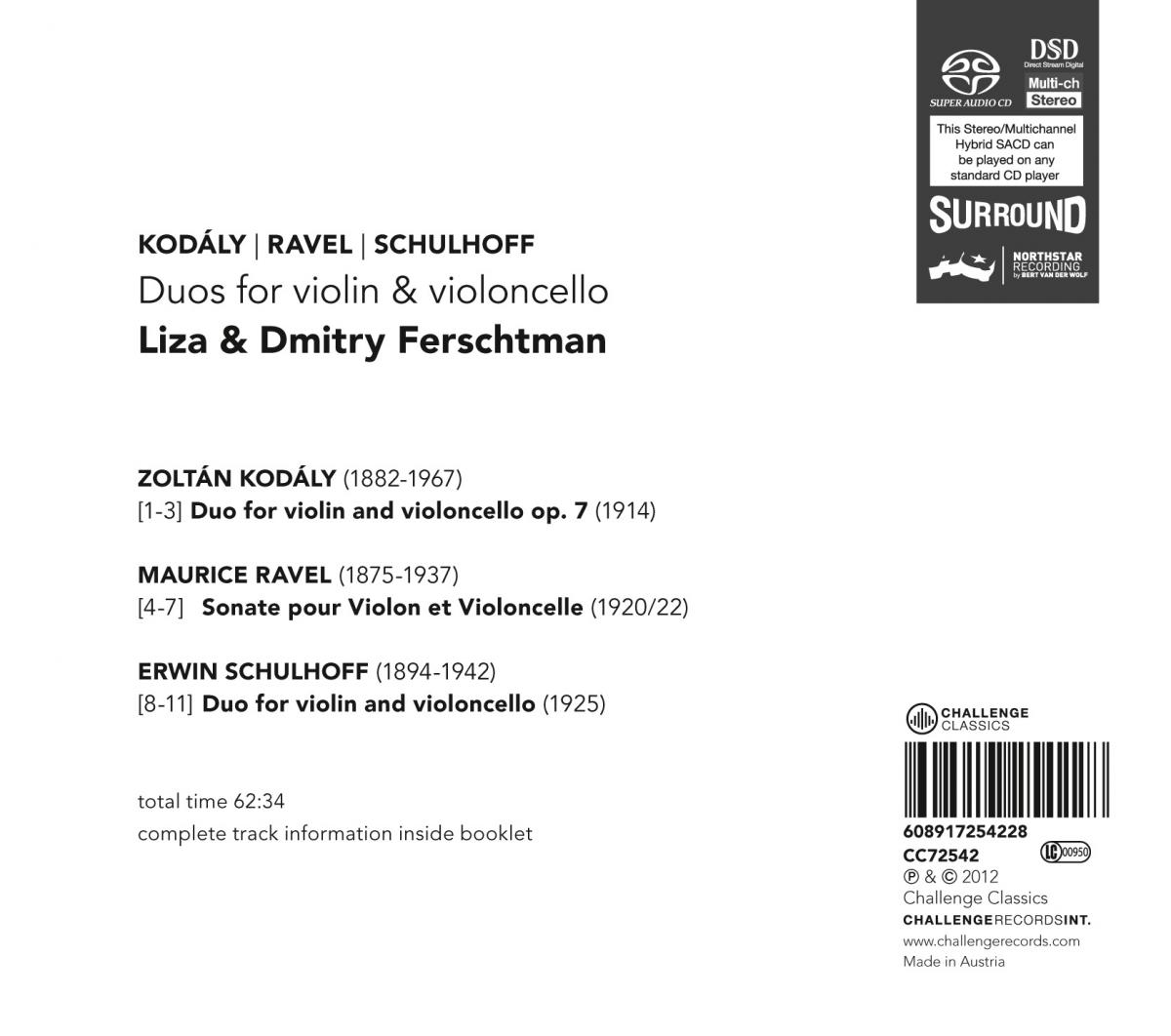 Ravel Sonata for violin and cello
After the death of Claude Debussy in 1918, Maurice Ravel was generally regarded as France’s leading composer. But in 1920 he flatly refused to accept the Légion d’Honneur medal. Perhaps he agreed with Baudelaire that a man of merit did not need to be decorated? Or was he thinking about the fact that he had been passed over for the French government award, the Prix de Rome, five times? His public refusal was referred to as the ‘Ravel affair’. To make matters worse, thanks to his newly acquired status, Ravel became estranged from some colleagues, in particular Satie and the younger generation. Ravel took his estrangement literally and moved to Montfort-l’Amaury, fifty kilometres west of Paris, where he took up residence in ‘Le belvédère’, which was to be his last home. There he led a secluded life with his cats and polished his refined oeuvre until his death in 1937.

Kodály Duo for violin and cello
The name of Zoltán Kodály will always be irrevocably bound up with that of fellow countryman and friend Béla Bartók, with whom he collected and investigated the sources of original Hungarian folk music. After studying German and Hungarian, he even devoted a thesis to the Hungarian folksong in 1906. Despite political troubles and despite being thwarted by the Hungarian regime with its Nazi sympathies, as a member of the opposition Kodály metamorphosed into the fundament of Hungarian cultural life. And in contrast to Bartók, he even managed to get works performed abroad, works such as Psalmus Hungaricus and parts of Hary Janós. Kodály had made it his object to create a tradition of true Hungarian artistic music on the basis of Hungarian folklore and tradition, as can be heard in his own works. He remained in Hungary even when his good friend Bartók was given political asylum in the United States. He received many honours and after the war he was an internationally famed composer and instructor. Kodály died in Budapest in 1967.

Schulhoff Duo for violin and cello
‘Music should bring primarily physical pleasure, even ecstasy, to the listener. It is not philosophy: its roots lie in ecstatic situations and its expression lies in rhythm.’ Czech composer Erwin Schulhoff wrote these words in 1919. With this statement, the twenty-five year old composer seemed to side against the Second Viennese School, against the philosophical ideas of Theodor Adorno, even though he had been strongly influenced by Schönberg. And yet these words are perhaps understandable, coming as they do from a person who, at the age of ten, was being encouraged by Antonín Dvořák shortly before his death. On Dvořák’s advice, Schulhoff first went to study at the Prague conservatory. Later he went to Vienna, and to Leipzig to study with Max Reger, where he won prizes for piano playing and composition. He even studied briefly with Debussy in Paris. Inside him there bubbled a mixture of Richard Strauss, Scriabin, Debussy, Schönberg, Janáček, and later even jazz. Although four years of military service during the First World War seemed to thwart Schulhoff’s artistic ambitions, he still continued to compose, even though he had to fight to protect his hands from the severe frost on the Russian front. After the war Schulhoff stayed in Germany. There he associated himself with the Dadaistic movement, was influenced by jazz and forged his style from Schönberg’s expressionism and Stravinsky’s neo-classicism. After returning to Prague, Schulhoff was inspired by Czech folk music and the music of Léoš Janáček, whose opera Jenůfa he became acquainted with as repetiteur for a performance in Cologne in 1918.