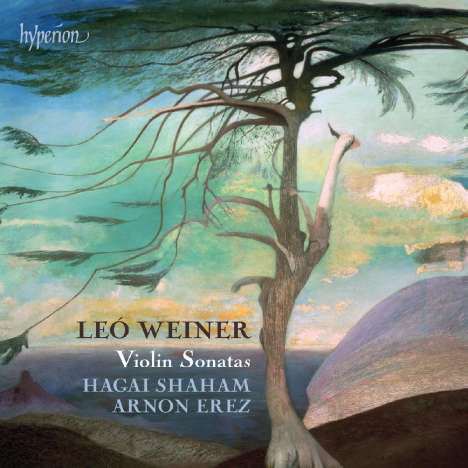 Hagai Shaham has made himself the master of the Hungarian idiom which prevailed in much Romantic violin music. He now turns to a composer who was one of the leading figures of new Hungarian music in the first few years of the twentieth century, although largely forgotten now. Leó Weiner was regularly hailed as the great new hope of Hungarian music—in 1908 one critic prophesied that he was the Hungarian symphonist that everyone had been waiting for. But in fact he did not produce any symphonies, and it was in chamber music that he fully achieved his early promise.

Hagai Shaham and Arnon Erez present a selection of Weiner’s music for violin and piano—and it is easy to fathom from them why Weiner was such a much-loved figure. His music is fastidious, highly melodic and occasionally nostalgic in appeal—delightfully lyrical and sensitive. It has a highly developed sense of rhythm, especially dance rhythm, and is also highly accomplished technically, of quite admirable craftsmanship. His two important Sonatas for violin and piano are recorded here, and both demonstrate the German romanticism which penetrated his musical vocabulary. The remainder of this disc is centred on Weiner’s works based upon different kinds of Hungarian folk tunes.

'Highly enjoyable … full of charm and wit … The playing is exemplary …Shaham and Erez make the best possible case for these pieces, duly wearing hearts on sleeve where appropriate' (International Record Review)

'Hagai Shaham plays with a large, richly Romantic tone and a feeling for the grand gestures in which the music delivers its message and the ethnic matrix from which it emerged. But he also has the virtuosic flair to put across the most flamboyant numbers' (Fanfare, USA)