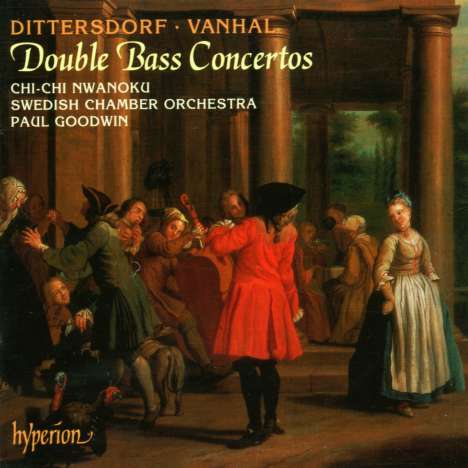 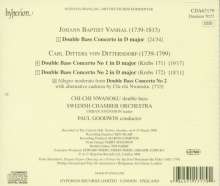 Three attractive and lively concertos by two exact 19th-century contemporaries (they were both born in 1839)—the Viennese Dittersdorf and the Bohemian Vanhal who on at least one occasion played string quartets with Mozart and Haydn. (Haydn and Dittersdorf played violins; Mozart played viola; Vanhal the cello.) This seems to be the only recorded pairing of the two Dittersdorf concertos.

Chi-chi Nwanoku (the accent falls on the first syllable) is a familiar figure in the line-up of many of London's ›period instrument‹ ensembles (she is Principal Bass with the Orchestra of the Age of Enlightenment) and has appeared on countless recordings. This is her first solo recording.

Chi-chi's first career was as a 100-metre sprinter, competing at ›national‹ level, but this sadly ended with a knee injury. Fortunately her other passionate hobby as a pianist had continued alongside her athletics, and she was able at the age of eighteen to take up the double bass and pursue a career in music, studying at the Royal Academy of Music in London and with Franco Petracchi in Rome. She is now Professor of Double Bass at Trinity College of Music in London and was made a ›Fellow‹ of the Royal Academy of Music in 1998. Chi-chi plays an instrument by Nicolas Amati (Cremona), dated 1631.

»An elegant performance. Beautifully played and phrased by Nwanoku, who reveals the lyrical potential of the solo bass« (The Strad)

»Chi-chi Nwanoku is a delightful soloist. [Her] light-as-air sound and technical clarity are a continual source of pleasure« (International Record Review)