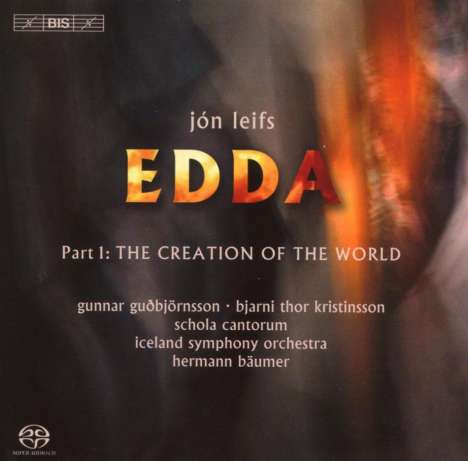 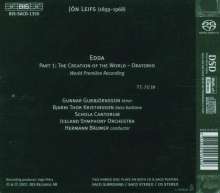 versandfertig innerhalb von 1-3 Tagen
(soweit verfügbar beim Lieferanten)
EUR 19,99*
Versandkosten
Few composers have been as consistently preoccupied with their national origins as Jón Leifs, who only found his calling as a composer when he encountered a collection of Icelandic folk music. From the very beginning, Iceland, its music and myths, its landscape and climate furnished him with the material for almost all of his compositions. And from the very beginning Leifs knew that he wanted to create a great oratorio using texts from the Edda, Iceland's national treasure. He started work on the libretto in 1930, and soon decided that the theme of the first section would be The Creation of the World. It wasn't until 1935, however, that he found himself in a position to start composing the music of Edda I, completing it in 1939. Largely due to the highly difficult choral writing, the work was never performed in its entirety during Leifs’ lifetime. Indeed the first complete performance only took place in 2006, in conjunction with the recording of the present disc. Disheartened by the lack of success, Leifs went on to other works, but in 1951 he returned to the subject and began work on Edda II. He completed it in 1966, but at his death two years later Edda III was left unfinished. Edda I consists of thirteen movements, each of which describes part of the creation according to Nordic mythology. As the headings of the individual movements suggest – Sea, Earth, Heaven, Sun, etc. – Leifs’ main concern is the depiction of nature. He achieves this in music which carries the hallmarks of the Leifs style, such as a liberal use of parallel fifths and irregular metric patterns. The scoring is among Leifs’ most colourful and inspired, including the composer’s signature Nordic lurs and an extended percussion section. This landmark in Icelandic music is performed by the Iceland Symphony Orchestra and the Schola Cantorum choir under the baton of Hermann Bäumer – a constellation that last came together on disc on the highly acclaimed Viking’s Answer, the previous Leifs’ release on BIS.