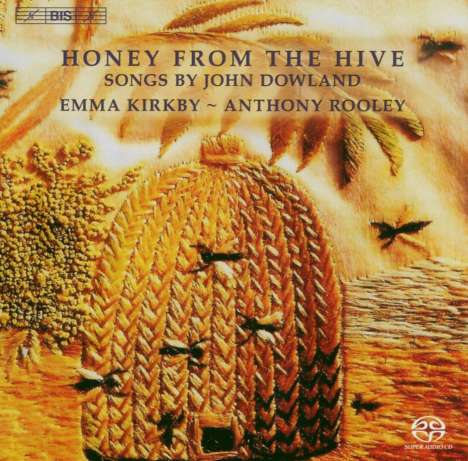 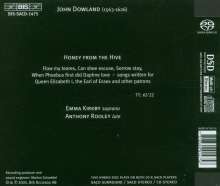 versandfertig innerhalb von 1-3 Tagen
(soweit verfügbar beim Lieferanten)
EUR 19,99*
Versandkosten
If the court of Elizabeth I could be compared to a bee-hive, John Dowland was one of its workers, tirelessly bringing in news from the Continent which he constantly visited, and as tirelessly producing the spiritual sustenance vital for the court's existence. It is this honey that Emma Kirkby and Anthony Rooley have gathered in an imaginative recital that focuses on Dowland's relationship to his various patrons – among them Elizabeth I and the Earl of Essex.

Ever since the 1970s Dowland has been a constant companion and golden thread for Emma Kirkby and Anthony Rooley, both as members of The Consort of Musicke, and in their separate careers. Now they return to him together, and their pleasure in doing so is evident. In her opening notes, Emma Kirkby explains why this music continues to fascinate her: 'It speaks of anguish, delight and ineffable beauty, allowing the singer freedom to embody thoughts and emotions which listeners have recognized and shared ever since! Is it any wonder that returning to Dowland always feels like coming home?' And in his liner notes, Rooley describes how Dowland responded to his patron's – 'sometimes with humour, or with pathos, or in complex narrative, but anyway, always with creative dialogue' – and relishes the opportunity of recording 'a "mature Dowland", revisiting works known and loved for more than 35 years.'

Kirkby and Rooley first appeared together on a BIS disc in 1985, performing madrigals from the court of Christian IV of Denmark (incidentally another of Dowland's patrons) and their most recent collaboration was on Classical Kirkby – a disc which one reviewer described as 'essential listening for all admirers of English song.' Extending the invitation to all music-lovers, the same applies to the present disc!

"Kirkby's simple voice is as perfect a complement to Rooley's lute as the melancolic, philosophical texts are to Downland's music." The Times 03 / 2006

"Kirkby's voice has gained more weight and vibrato with time while retaining its purity, resulting in a rich palette from which to choose and ideally complementing Rooley's tonal range," Grammaphone 04 / 2006

"...in ensemble, intonation and above all in their mutual musical vision, these two artists are as one." BBC Music 04 / 2006

"It seems obvious that here we have two superlative musicians making a recording simply because they want to share their love of the experience." International Record Review 03 / 2006