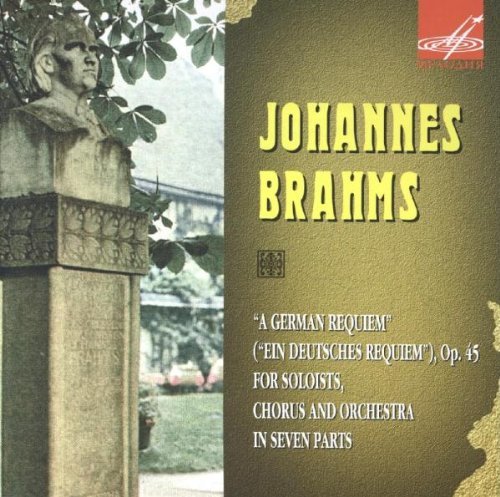 The traditional Latin text of requiem mass repeatedly attracted attention of the most prominent composers in the world history. Some of them could discover new contents of austere divine service texts – that was the way the masterpieces like Mozart’s and Verdi’s ones appeared. The German composer of the 17th century Heinrich Schutz was the first who turned to the scriptural texts in his mother tongue translated by Martin Luther. Johannes Brahms followed him and named his requiem »German«. The passages, taken from Old and New Testaments and united in the composition, do not correspond the established order of the requiem mass. Probably, Brahms’ »Requiem« is some meditation on caducity of human life and inevitability of physical death that is expressed in vocal and symphony genre.

Brahms was hatching the idea of this composition within ten years. His close friend Robert Chopin’s tragic death became some »starting point« of the idea. Moreover, his mother’s death served as reasonable grounds for completing of what had been started.

The Old and New Testaments texts united in the composition form the basis of seven diverse parts. The first and the last parts – »Blessed are they that mourn…« and »Blessed are the dead…«– organically frame the cycle. The meditation on Death (»For all flesh is as grass…«) in the second part is balanced by the idea of Resurrection (»For here have we no continuing city…«) in the sixth one. The mournful third part (»Lord, make me know mine end…«) finds its consolation in the fifth one. The central part of the Requiem »How lovely are thy tabernacles« makes gradual transition from sorrow and mourns to hope for life after death.

The Yurlov State Academic Chorus was named after Alexander Yurlov soon after the death of the talented musician and choir conductor. His unexpected death happened when the choir was rocketing to its peak of mastery. The group was obliged with this success to its brilliant leader. Within those fated 15 years that Alexander Yurlov and the choir worked together (1958–1973) they won fame of the best alliance of the singers and the conductor in the Russian chorus music of the Soviet period. Juri Ukhov who worked as chapel master of the choir since 1964 was brought up and matured in the heart of the choir. At that time he was a witness of brilliant performance of Brahms’ »Ein Deutches Requiem« and »Schicksalslied«. Several years later he got an opportunity to perform »Requiem« in the concert. The recording from the Great Hall of Moscow Conservatory gives the bright idea of the sonorous chorus manner of singing that was made of mellow timbre of female choir, silver ringing of tenors and powerful basses. The latter were especially valued for their uniqueness and fascination in our country. (melody. su)