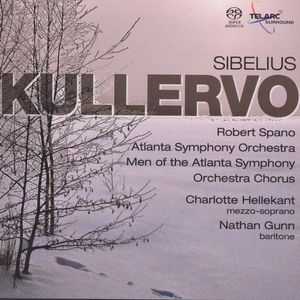 First recording of Kullervo with an English-speaking chorus

On November 28, Telarc will release the Atlanta Symphony Orchestra’s recording of Kullervo, the five-movement narrative symphony composed by Jean Sibelius at the age of 25. Kullervo, was based on a story from the Kalevala, the mythic history of the ancient Finns, and from the moment of its 1892 premiere in Helsinki – conducted by Sibelius – Kullervo, became a symbol of Finnish nationalism, and the composer became a national hero.

The all-volunteer Atlanta Symphony Orchestra Chorus learned Finnish in order to perform this piece. Jeff Baxter, assistant director of choruses in Atlanta and a tenor in the ASO chorus, began learning the language from a native speaker about a year ago, in preparation for training the chorus to sing the piece. The Finnish native speaker did not know music, so she intoned the syllables, and then Baxter and Director of Choruses Norman MacKenzie made a phonetic translation. The chorus undertook months of preparation, including drilling on Monday nights on the language alone.

“What really impressed me was the chorus,” said Producer Elaine Martone. “They gave 150 percent, molding the phrases and singing with such passion and beauty that it took my breath away. On Sunday, at about 3: 30 (the midway point of the recording) there was such a level of excitement that I felt completely out-of-body."

Kullervo is a powerful figure from the Kalevala, the epic Finnish saga composed of 50 poems compiled by Elias Lönnrot, a physician and folklorist who traveled throughout the Finnish-Russian borderlands recording the lyrics, stories, and ballads sung to him by rural people. Born with magical powers, Kullervo was raised as an orphan by his tribe’s enemies. As a young man, Kullervo finds his family, who thought he was dead, but learns that his sister is missing. Because he is inept at farm tasks, Kullervo is sent off to pay the family’s taxes. On his return he seduces a beautiful maiden who, they both discover, is his long-lost sister. In horror and shame, she kills herself, Kullervo goes to battle, and finally kills himself as well.

Sibelius’s music for this dark tale abounds with the rhythms and meters of Finnish folk music, which captures the poetry’s brooding sense of hard lives with the ever-present spectre of tragedy. Intent on making this composition – his first large-scale orchestral work – “thoroughly Finnish in spirit,” Sibelius traveled to the coastal town of Porvoo to hear Larin Paraske, the famed female folksinger, perform Finnish laments and runes in order to internalize the rugged, archaic style.

American-born Nathan Gunn, who sings the role of Kullervo, is one of today’s most exciting and in-demand baritones. Most recently he sang the roles of Clyde Griffiths in the world premiere of An American Tragedy and Papageno in Die Zauberflöte at the Metropolitan Opera and Ottone in L’Incoronazione de Poppea with Houston Grand Opera. He also appears regularly with Chicago Lyric Opera, Santa Fe Opera, Seattle Opera, and Glimmerglass, and in Europe he has performed with the Bayerische Staatsoper, Paris National Opera, and the Royal Opera at Covent Garden. Mr. Gunn’s orchestral engagements have included performances with the Boston, Chicago, and London Symphonies, The Cleveland Orchestra, and the New York Philharmonic. Mr. Gunn has appeared on another Telarc release, as baritone soloist on the Brahms German Requiem with the Mormon Tabernacle Choir.

Swedish mezzo-soprano Charlotte Hellekant, who sings the role of Kullervo’s sister on this recording, appears extensively on both the opera and concert stage and has been highly praised as an interpreter of contemporary music. She has performed in America and Europe in such opera houses as Deutsche Oper Berlin, Glyndebourne, English National, Glimmerglass, the Metropolitan Opera, Paris National Opera, Washington National Opera, among others. Highlights of her concert appearances include engagements with Orchestre de Paris conducted by Sir Georg Solti, the NDR Orchester with Christoph Eschenbach and the Orchestre de Paris led by Paavo Järvi.

This recording of Kullervo, is Robert Spano’s seventh with the orchestra. Among them, Vaughan Williams’ Sea Symphony, Berlioz Requiem,, and Jennifer Higdon’s City Scape have received a total of five GRAMMY Awards. Mr. Spano’s other Telarc albums with the ASO are Rainbow Body featuring works by Christopher Theofanidis and Jennifer Higdon; Rimsky-Korsakov’s Scheherazade; and a disc of world premiere recordings of works by David del Tredici and Christopher Theofanidis and “Lamentation” from one of Leonard Bernstein’s earliest works, Symphony No. 1 (Jeremiah). During the upcoming season, Mr. Spano is scheduled to record two new discs for Telarc: Michael Gandolfi’s Garden of Cosmic Speculation paired with Jennifer Higdon’s Dooryard Bloom and an album of works by Vaughan Williams.