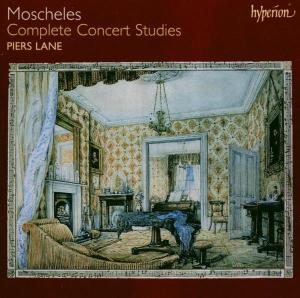 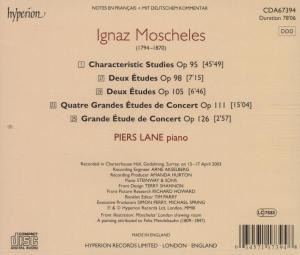 Given Moscheles contemporary fame it is surprising how much his reputation has faded. He bridged the gap between the Classical and Romantic movements and, though a fine pianist and a sincere and skilled craftsman as a composer, his downfall was surely that his transitional idiom was quickly overshadowed by the Titans of the new Romantic movement such as Chopin, Schumann and Liszt. None of this need concern us now—his music has it’s own worth, as our recordings of his concertos have shown.

This CD brings together all his works that could be described as ‘concert studies’ (it excludes the Op 70 set as these are much more didactic in nature). The Op 95 set is probably his greatest solo piano work and the many foretastes of later composers such as Schumann and Brahms reveal the influence that Moscheles had on later generations.

Piers Lane does his customary magnificent job in presenting these studies, most of which are premiere recordings.

'Piers Lane's concern is to underline the unexpected meatiness of the piano writing, and he offers lusty, swaggering performances … it's a revelatory recording' (International Piano)

'Lane is the kind of pianist who can make anything sound good. His formidable technique is evident from the opening étude … it is all the better that this recording is engineered well and we have a fine instrument' (American Record Guide)