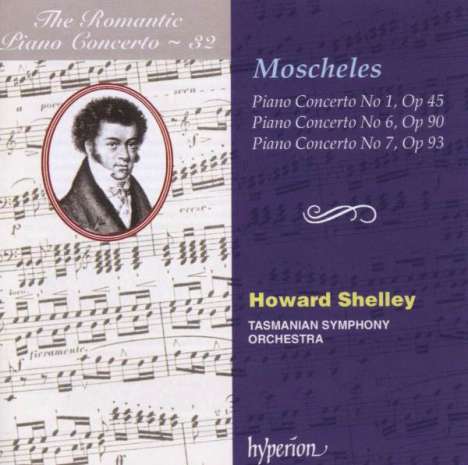 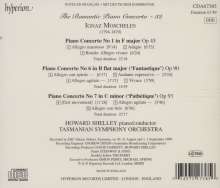 The continuation of our survey of Moscheles piano concertos brings us to three works which have never been recorded before. The 1st Concerto, written in 1819, is a very Mozartean affair; though the young composer had become a friend of Beethoven it seems the example of that composer's last three concertos hadn't been followed, instead we have a work full of charm, grace and untroubled lyrical melody.

For his final three concertos (6, 7 & 8) Moscheles broke away from the traditional three-movement structure and produced works that presage Liszt in their combination of fast and slow movements in one structure. These works, written in London in the 1830s, show that at that time Moscheles, later regarded as a traditionalist, was then at the forefront of the developing Romantic movement in music. The lessons of Beethoven, so absent in his first concerto, are now clearly learned. Howard Shelley has already proved himself the perfect exponent of the repertoire which bridges the classical and romantic period in music. His first Moscheles recording (Concertos 2 & 3 and 'Anticipations of Scotland') has met with universal acclaim and this release will surely follow.

'Howard Shelley's account of the First, Sixth and Seventh of the eight Moscheles piano concertos provides powerful argument for their return to the repertoire' (International Piano)