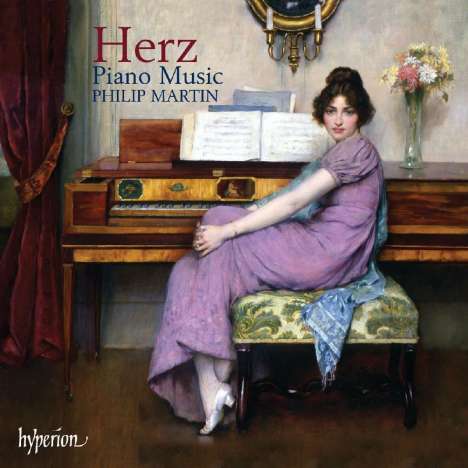 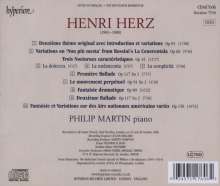 The composer-pianist Henri Herz was one of the most brilliantly fashionable musical personalities of his day, performing to large audiences throughout Europe, and touring America to great acclaim. In the early part of the nineteenth century his music outsold that of Liszt and Chopin. By the early 1850s, however, tastes were beginning to change and his sparklingly virtuosic works began to be derided by contemporary commentators and to drop out of circulation. However this is delightfully enjoyable music, clearly demonstrating the tastes of the time, and worthy of our attention. Hyperion has contributed greatly to a resurgence of interest in Herz's music with the recordings of six of his piano concertos (CDA67465 and CDA67537), and this disc is the first recording devoted exclusively to his solo works. The Variations on ›Non più mesta‹ from Rossini's La Cenerentola Op 60 is Herz's best-known work. Several composers were attracted to the show-stopping aria sung by Rossini's eponymous heroine, and Herz's response is as dazzling and witty as the original, demanding pyrotechnical displays of agility from the pianist. Philip Martin has delighted listeners with his eight volumes of the works of Gottschalk – a composer undoubtedly influenced by Herz – and his performances on this disc are equally as agile and graceful.

»Philip Martin proves a strong Herz advocate, displaying a genuine affection for the music and all the requisite flair for the abundant trills, roulades, scales … and repeated left-hand jumps« (International Record Review)

»Martin, fresh from his laudable eight-disc survey of Gottschalk's piano music, tackles these well-programmed works with sensuousness and vitality, capturing the ornately flamboyant allure of the music with great affection« (MusicalCriticism. com)

»Herz may not be a great composer, yet his stuff certainly is fun to digest in small doses, especially when you consider Philip Martin's appropriately light and colorful touch, supple finger work, and marvelous sense of dramatic timing... Collectors who dote on the rare Romantics need no prodding to acquire this excellently engineered release« (Classicstoday. com, USA)

»Philip Martin sounds like he is enjoying himself, and his technique is fully up to the tasks at hand« (Fanfare, USA)