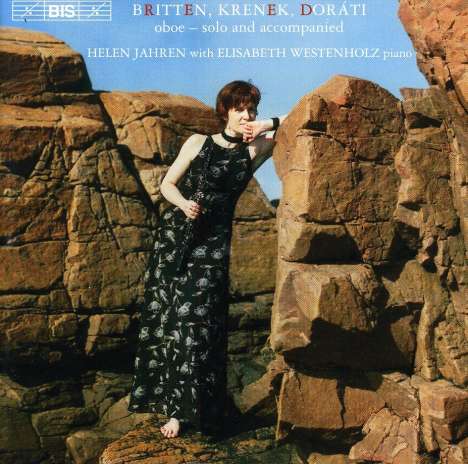 lieferbar innerhalb einer Woche
(soweit verfügbar beim Lieferanten)
EUR 19,99*
Versandkosten
Helen Jahren is one of today’s most prominent oboe soloists. As one might expect from a former pupil of the legendary Heinz Holliger, she takes a great interest in contemporary music and has premièred a succession of concertos and works written directly for her. On this disc however, she presents a selection of pieces written between 1935 and 1983 for oboe, with and without piano accompaniment. The composers are Britten, Doráti and Krenek – of English, Hungarian and Austrian origin respectively – and the musical styles they employ in these pieces are even more varied. But as will be obvious to any listener, the specific qualities of the oboe have been a strong inspiration for all three composers. These qualities have been described by Berlioz: ‘The sounds of the oboe are suitable for expressing simplicity, artless grace, gentle happiness, or the grief of a weak soul’, and by Richard Strauss: ’With its thick and insolent low register and its pointed, incisively thin upper register the oboe is very well suited to humorous effects and caricatures: the oboe can rasp and squawk, just as well as it can sing nobly and chastely.’ These diverse personalities of the oboe are much in evidence on this disc. And they are admirably brought out by Helen Jahren with the assistance of Elizabeth Westenholz, known to BIS followers for a large number of recordings, including the complete works for solo piano by her compatriot Carl Nielsen as well as Beethoven’s piano concertos and various chamber music programmes.