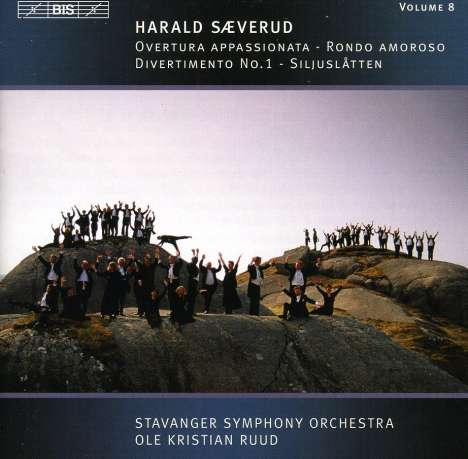 lieferbar innerhalb einer Woche
(soweit verfügbar beim Lieferanten)
EUR 19,99*
Versandkosten
With this eighth volume we close our series of the orchestral music by Norway's greatest symphonist, Harald Sæverud (1897-1992). The backbone of the project has been his nine symphonies, including the unnumbered Sinfonia dolorosa (No. 6) and Salme ('Psalm', No. 7). This, the final disc, opens with what remains of the very first symphony, composed during Sæverud's student days in Berlin around 1920. Overtura appassionata was originally conceived as the finale of the (never completed) symphony and first performed – in Berlin – under the title Symphonic Fantasy in 1921. Later reworked and renamed, it betrays Sæverud's roots in late romanticism, but also points forward to features of his individual tonal language, including the eruptive force that we find in much of the later orchestral music. Accompanying the Overtura are a number of works composed during 1939-1943 – a period which more or less corresponds with the German occupation of Norway. But unlike the three 'war symphonies', Nos. 5-7, written as a reaction to the political situation, these are smaller-scale pieces. Several of them (Goat Song Variations, Small Bird Waltz) are inspired by the peaceful surroundings of the composer's home in the countryside, and all except the Divertimento have their origins in the small-scale piano pieces which became Sæverud's safety valve when the darkness of war became over-powering. Among this later group are some of the composer's most well-loved pieces, such as Rondo amoroso in his own version for oboe, bassoon and strings. As on previous discs in this series it is the Stavanger Symphony Orchestra who perform the music of their compatriot. Conducted by Ole Kristian Ruud, their interpretations on other instalments have been described as 'splendid', 'committed and alert', and to the reviewer who asked for 'more, please!' after volume 5 we can only say: You're welcome!