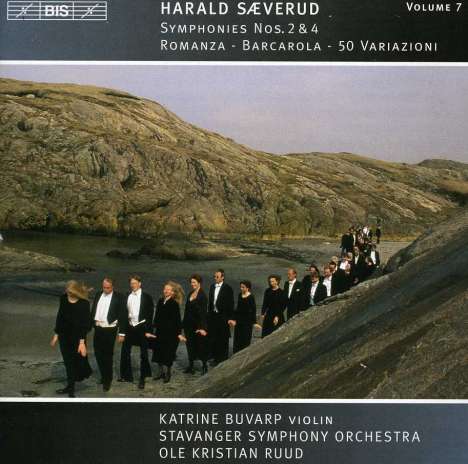 versandfertig innerhalb von 1-3 Tagen
(soweit verfügbar beim Lieferanten)
EUR 19,99*
Versandkosten
This the seventh instalment of our series of Sæverud’s orchestral music features Nos. 2 and 4 of his nine symphonies as well as three shorter works, all dating from the period between 1923-1942.

During the 1920s the Norwegian composer was hard at work developing his style – from the late Romanticism of the first three symphonies towards a more neo-classical approach. This development may have been one reason for the revised version of the Second Symphony, made in 1934, 11 years after the first performance of the work. The search for a greater simplicity is obvious in the 50 variazioni, an elegant piece in which a three-bar theme is varied fifty times. It continues in the Fourth Symphony, completed in 1937, almost chamber-like in long passages and less strident than its predecessors.

Barcarola was conceived as both an orchestral work and a piano piece, just like Sæverud’s perhaps most famous composition, Rondo amoroso. Both were included in Easy Pieces for Piano, one of the composer’s most popular piano albums. The latest of the works on this disc, Romanza for violin and orchestra, was composed during the German occupation of Norway, but unlike other, more impassioned works of this period it is decidedly lyrical. Stavanger SO and Ole Kristian Ruud have received great acclaim for previous discs in the series, their performances being described as ‘splendid’, ‘committed’, ‘alert’ and ‘excellent’ by critics in Gramophone, BBC Music Magazine, Fanfare and MusicWeb International.