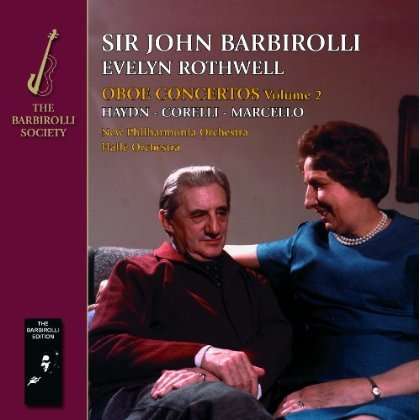 lieferbar innerhalb 1-2 Wochen
(soweit verfügbar beim Lieferanten)
EUR 14,99*
Versandkosten
Lady Barbirolli's recorded performances, when heard on radio here and abroad, invariably strike a distinct and responsive chord with listeners. What a joy, therefore, that more of them exist in the archives to be made available through this second issue. The music of the Marcello and Corelli concerti will already be familiar to purchasers of Volume One, published by The Barbirolli Society (SJB1009), but the performances featured here are, of course, not the same: a decade separates them from the earlier ones. But as on that disc Miss Rothwell played to accompaniments conducted by her husband, Sir John Barbirolli [1899-1970], while the fact that they recorded the Marcello Concerto together twice and the Corelli three times – there was a 78rpm performance made in 1946 – speaks eloquently of the enduring musical worth and appeal among listeners of this musical partnership in these highly attractive pieces. As well as concertos, the CD also features Evelyn in chamber works. The Sonatas by Telemann and C P E Bach were based by Evelyn Rothwell and her harpsichordist friend Valda Aveling on manuscripts found in Copenhagen and at the Royal Conservatoire of Music in Brussels. The items originally recorded for HMV at the end of the 78rpm era recall another of Evelyn Rothwell’s favourite musical collaborators, Wilfrid Parry. Their perform together in the charming Sonata by Jean-Baptiste Loeillet and the arrangement of Handel’s Air and Rondo – a delectable little miniature. The moving Melody by Welsh composer and conductor, John Morgan Nicholas, was composed in memory of a daughter who died young. Another recital piece is the harpsichord-accompanied Siciliana by the English singer and songwriter Michael Head.