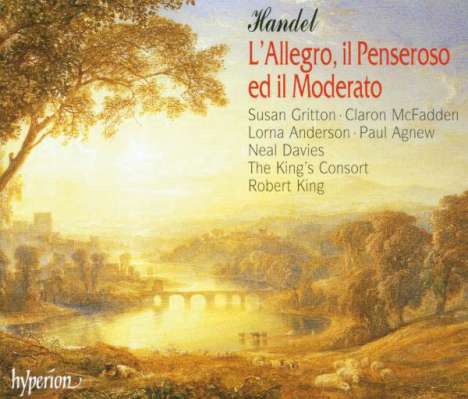 After the success of Alexander's Feast, a setting of the much admired ode by John Dryden, it was wondered: would the result be greater still if Handel could be persuaded to set the words of a poet even greater than Dryden? Such were the thoughts of an important group of Handel's friends centred around the philosopher James Harris and including Charles Jennens (later the librettist of Messiah) and the Fourth Earl of Shaftesbury. It was under their influence that Handel came to set the poetry of John Milton, first in L'Allegro, il Penseroso ed il Moderato, and later in the oratorio Samson.

Jennens helped to prepare the libretto for L'Allegro, the first two parts of which are adapted from Milton's two complementary poems, L'Allegro ( »The Merry Man« ) and Il Penseroso ( »The Thoughtful Man« ), respectively celebrating the different joys of two opposed personalities. The initial idea of interweaving lines from the two poems to make a text for musical setting actually came from James Harris, who also provided the first draft of the libretto. By 19 January 1740 the libretto was finished, and with Handel's enthusiasm and speed in writing the first performance took place on 27 February!

There is no definitive version of the work as Handel made many changes over time. However, the intention of this perfomance is to retain the freshness of Handel's original vision with the advantage of the best of his second thoughts.

»This pure Baroque beauty is a dramatic piece rich in short, tuneful airs, each more beautiful than the last. Few Handel vocal works give me such enduring pleasure« (Classic FM Magazine)