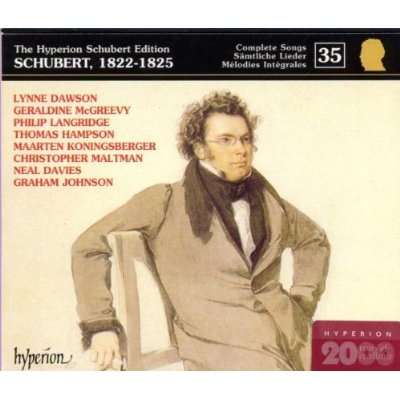 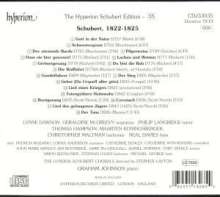 During the period encompassed by Volume 35, and in contrast to the fecundity of the earlier years, a comparatively small number of songs were composed. On the other hand, each of these songs is, almost without exception, of especial beauty and significance. The majority of them have already been issued in the series – not only Die schöne Müllerin itself, but also four of the seven Lady of the Lake songs (Volume 13), the Matthäus von Collin songs (Volumes 3 and 5), the Craigher settings sung by Margaret Price (Volume 15), the Schulze settings performed by Peter Schreier (Volume 18), and so on. However, the songs that remain to be issued from this four-year period are far from negligible. If Volume 35 contains a few performances sung by distinguished artists some years ago, the majority of the disc comprises important songs recorded recently. A glance at the list of lieder on this disc will reassure the listener of the quality of the music; of its pedigree, it is enough to say that Schubert wrote it in his middle to late twenties. At the heart of the programme are five of the Rückert settings of 1823, four of which are uncontested masterpieces. Two fine settings of Bruchmann, and two of Mayrhofer, show the composer's continuing enthusiasm for poetic inspiration close to home; and the last Craigher setting, Totengräbers Heimwehe, a song which has always been a favourite among male singers, shows Schubert at the height of his powers. There are, in addition, lesser-known choral settings of Christian Ewald von Kleist, de la Motte Fouqué and Walter Scott which may mostly be ranked as first-class Schubert. One would expect nothing less from the composer in the full flower of his maturity.

»McGreevy's Lachen und Weinen is simply the best performance I know. No lover of Schubert's genius should miss this CD.« (International Record Review)

»Throughout the disc, Graham Johnson's accompaniments are typically illuminating with numerous touches of detail glossed over by many pianists. And, as ever, his vastly comprehensive notes, amounting to no less than a book, are in a class of their own.« (BBC Music Magazine)

»Even if you haven't been collecting this first-rate series of recordngs, the quality of the singing and the appealing variety of the programme provide a delightful encounter with Schubert's lyric genius« (bn. com)