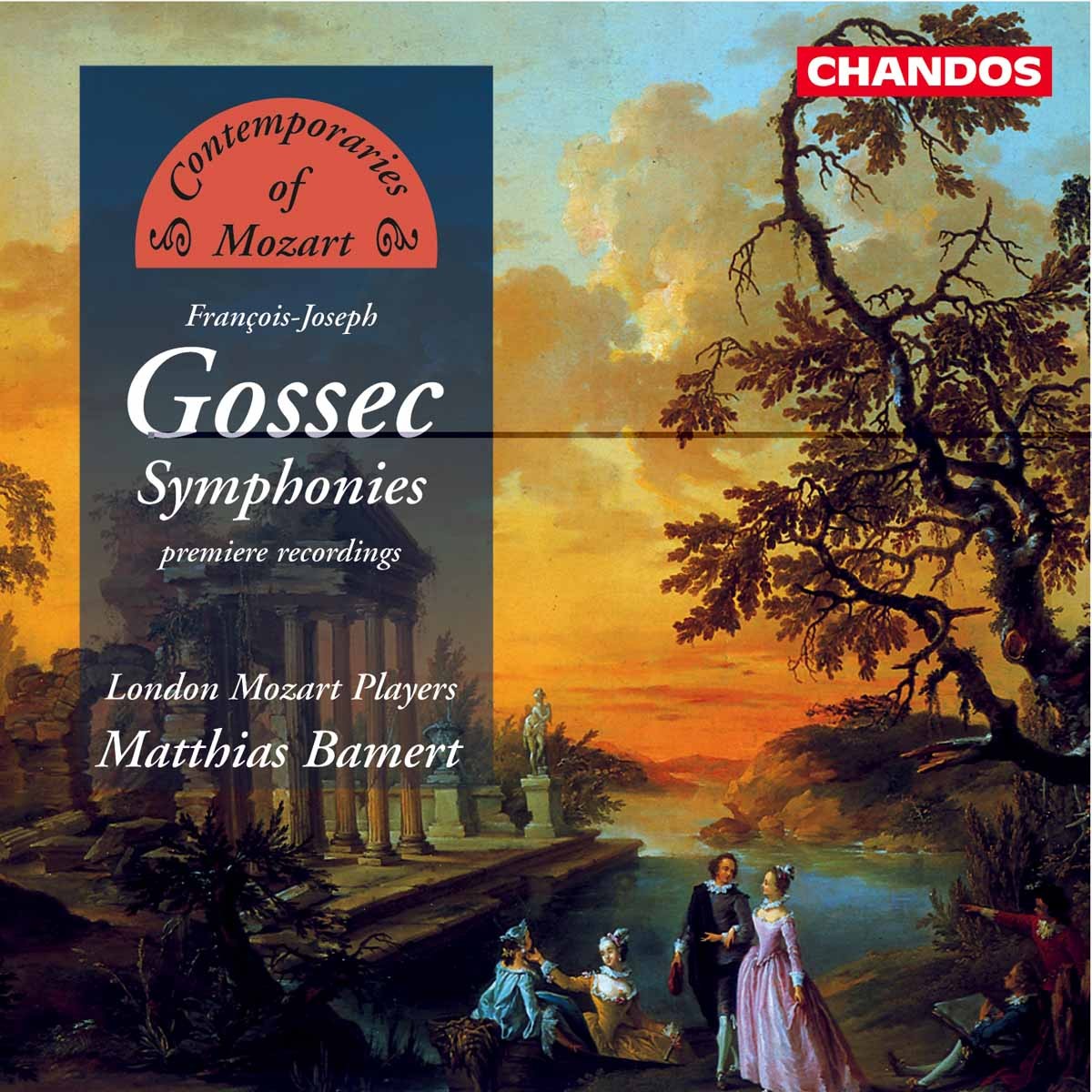 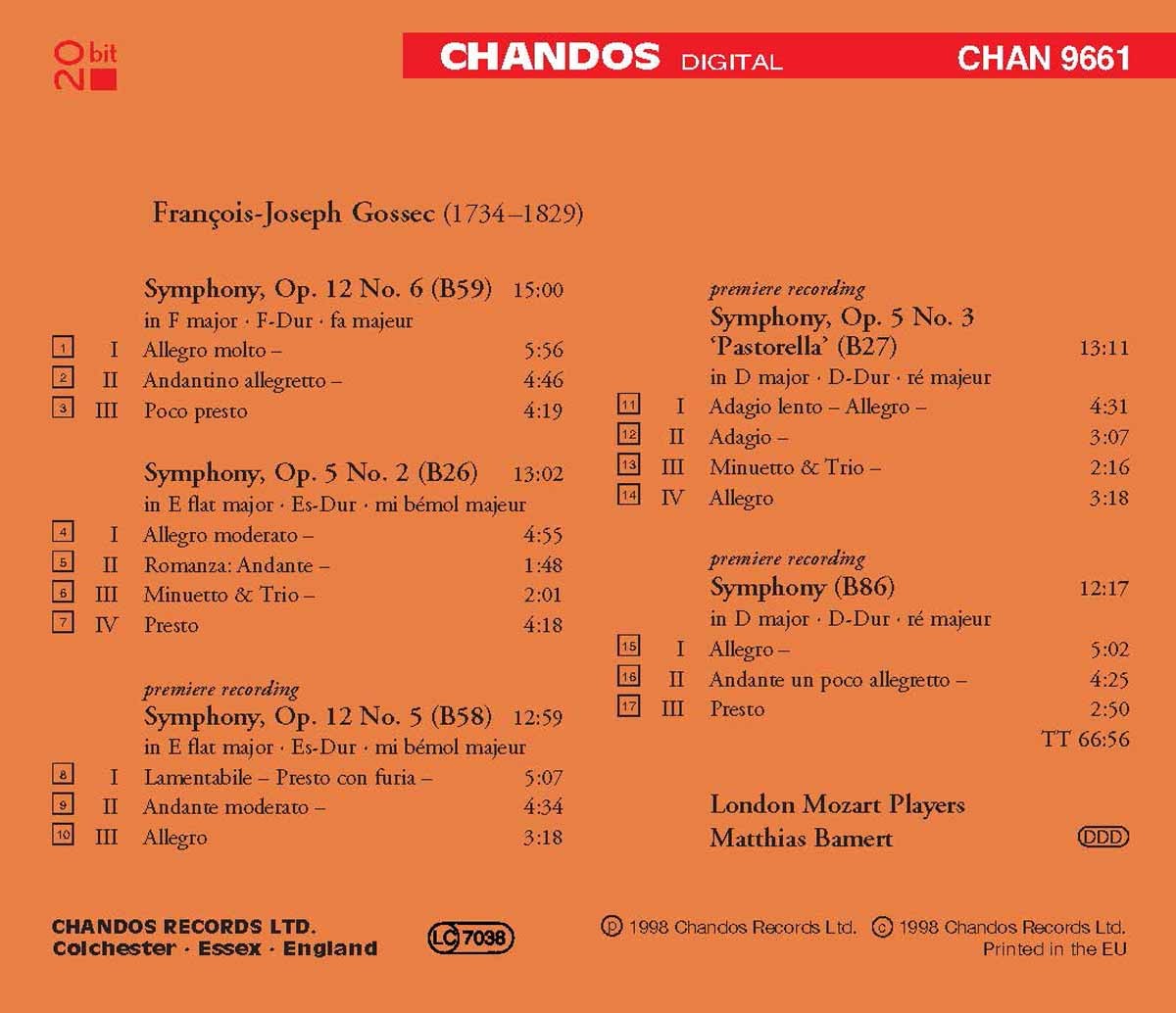 The first two symphonies here come from a set of six published in 1761 or 1762 as Op. 5. All are in four movements and Symphony No. 2 in E flat, is scored for strings, two flutes, two clarinets and two horns. It begins with a melodious Allegro moderato in sonata form. The two middle movements are a short ternary-form Romanza and a Minuet with trio.

The finale is a busy rondo with a minore episode. Symphony No. 3 in D major is scored for strings, two flutes and two horns. The first movement is in most ways similar to that of No. 2 but has a short, slow introduction and ends quietly. The second is a dignified Adagio for strings alone, followed by a Minuet and Trio. The last is a compact mono-thematic sonata-form Allegro in the whirling 12 / 8 metre of a tarantella, whose dynamic surprises emphasize the Manheim characteristics suggested in the first movement. The next two symphonies come from the set of six published in 1769 as Op. 12, all of which revert to Gossec’s original (Op. 3) pattern of three movements; both are scored for strings and pairs of horns and oboes. The Symphony in E flat, Op. 12 No. 5, begins with a slow introduction (Lamentabile) followed by a purposeful sonata-form Presto con furia. This is followed by an elegiac Andante moderato in C minor. The finale is in sonata form with a spirited 6 / 8 ’hunting’ rhythm. The Symphony Op. 12 No. 6 boasts an exceptionally bright and tuneful first movement with at least four themes. The tender, lyrical slow movement is notable for its eloquent writing for muted strings and is followed by a binary-form finale.

The last of the five symphonies on this album is the latest and probably dates from 1776 or earlier. It does not have the feel of a symphony at all: the first movement is like an extended triumphal march, the second like a funeral march and the third (Presto, 3 / 8) a carefree finale.

"...If the writing of music history in the nineteenth century hadn’t been dominated by Germans, our picture of its evolution might have been different. Paris, or London, would appear as equally, if not more important in the late eighteenth century as Vienna, and the composers who worked would have more of a place in the sun. Gossec is a good example. His 1760’s symphonies are rich in ideas and full of delightful orchestral touches. Apart from a few crescendos and the importance of wind-writing the symphonies sound independent of Mannheim and for richness of invention they rival Haydn’s contemporary. The imposing "Lamentabile" that opens Op. 12 No. 5 has some impressive final chromatic turns, and the funeral D minor andante from the D major Symphony Op. 12 No. 6 bubbles with ideas and good tunes well developed, and deserves an important place in the picture of the development of the symphony. Though these performances lack the special colour of period instruments, they are very stylishly performed with a lot of attention to balance and an evocatively captivating use of mezzo-piano. Perhaps the best recommendation for this album is it leaves one wanting to find much more of Gossec’s inventive and well-wrought music..." Roderick Swanston - Classic CD - October 1998