Feodor Schaljapin - The Art of Vol.1 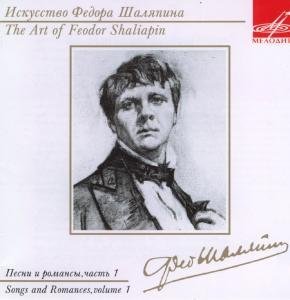 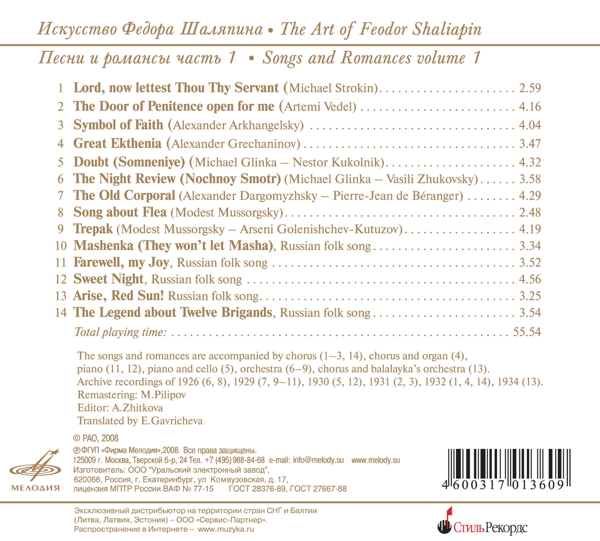 Being a Kazan born Feodor Shaliapin started his singer’s career as a choirboy. His love for singing that enthralled him tremendously gave rise to the dream of becoming a professional singer. Since he became seventeen Shaliapin took serious steps to have his dreams fulfilled. In winter 1890 he became a trouper of Semenov-Samarsky’s company, in 1891 he joined Derkache’s troupe. Some time later he becomes a member of Klucharev’s opera company. However, poverty of the family, his mother’s sudden death made his complicated life of a novice even more difficult. Since autumn of 1892 Shaliapin took lessons from Dmitry Usatov who played a tremendous role in his artistic career.

Usatov was a former singer at the Bolshoi Theatre and a skilled teacher of singing. He both gave the lessons free of charge to the young man and provided him with financial support. Some years later Shaliapin appreciated his teacher’s influence at its true value: “It was he who brought my first serious thoughts about theatre into my mind, who taught me to feel the character of various musical works, refined my taste and – what is the most precious thing that I have considered throughout my career till the present – taught me visual musical perception and musical interpretation of the performed plays”.

Thanks to Usatov’s effort Shaliapin managed to get the job in Tiflis Opera House where he tried himself for a great variety of drama, lyrical and comic parts. At the beginning of 1894 Shaliapin started singing in Saint Petersburg Panaev’s theatre. His unusual voice and constantly developing mastery of an actor drew the general public’s attention. He made a lot of new friends and acquaintances. Owing to them Shaliapin successfully passed the test in Napravnik’s presence and became a Mariinsky Royal Theater actor. He was only twenty two at that time! However, the atmosphere of formality and stagnation that reigned in the theatre brought the singer to the decision to change the place of work and he joined Mamontov Russian Company. Several years of work for Mamontov troupe that was remarkable for the innovative performances and free play in the choice of expressive means contributed a lot to Shaliapin’s creative development.

Work in the Bolshoi Theatre and then after the October Revolution in Mariinsky Opera House as an art director became the next milestones in Shaliapin’s creative life. In 1921 Shaliapin went abroad to give performances, and that long-drawn-out tour turned into his permanent residence in foreign countries. Within that period Shaliapin made more than 50 two-side records; it was mostly Russian music. It is worth noticing that Shaliapin respected Modest Mussorgsky most of all among the Russian composers: “There was nobody equal to him in inspiration and creative genius of Artist either before or after him. Theatrical truthfulness was his element”. The quest and reflection of this “theatrical truthfulness” was Feodor Shaliapin’s credo. (melody. su)