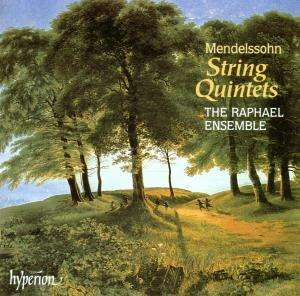 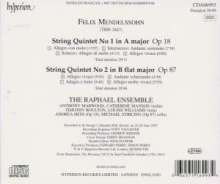 Mendelssohn was without doubt the most precociously gifted composer the world has ever known: not even Mozart produced 'mature' masterpieces while still in his teens. He was also double prodigy on the violin and piano, an exceptional athlete, a talented poet (Goethe was a childhood friend and confidant), multi-linguist, watercolorist and philosopher. He excelled at virtually anything which could hold his attention for long enough, although it was music above all which activated his creative imagination.

The two String Quintets were composed at opposite ends of his short career. No 1 was written in 1826, soon after the completion of the Octet and Emajor Piano Sonata and before the Overture to 'A Midsummer Night's Dream', when Mendelssohn was still only seventeen. He later substituted a slow movement in memory of his friend the violinist Eduard Rietz, and it was this revised version of the Quintet that was published in Bonn the same year and is recorded here.

Quintet No 2 dates from 1845 (when Mendelssohn was still only thirty-six), a year before his triumphant success with Elijah in Birmingham and just two years prior to his premature death.

'The performances are both inspired and passionate. I suspect they will provide great listening pleasure to all who admire these scores for many years to come' (Fanfare, USA)