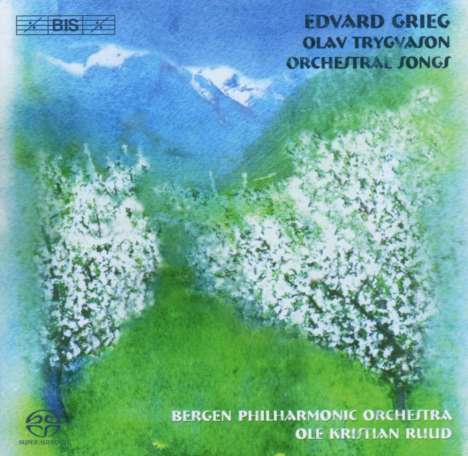 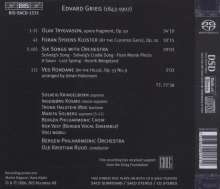 lieferbar innerhalb 1-2 Wochen
(soweit verfügbar beim Lieferanten)
EUR 19,99*
Versandkosten
Grieg is mainly thought of as one of the great lyrical composers, but for a long time he struggled to develop a dramatic side to his music. One result was the three scenes from the projected opera Olav Trygvason, a collaboration with the poet Bjørnstjerne Bjørnson. Grieg and Bjørnson wanted to develop a national, Norwegian opera, avoiding the Wagnerian influences predominant at the time. Nevertheless, as the Olav Trygvason fragment shows and as Grieg himself admitted, Wagner's pull was too strong to be entirely resisted; perhaps understandably, given that the subject matter - the struggle of the old Norse Gods and their followers against the Christian faith - is rather Wagnerian in itself.

Another Bjørnson collaboration, At the Cloister Gate, is also operatic in conception, but in a musical language more clearly Grieg's own. The disc continues with the Six Orchestral Songs, in which the composer is firmly back on familiar ground. These were orchestrated by Grieg himself, not with the intent to form a cycle, but simply because he himself rated them highly: from Solveig's two intensely moving songs from Peer Gynt to Last Spring, sometimes regarded as one of Grieg’s finest songs.

The songs - including Johan Halvorsen's orchestration of Ved Rondane - are interpreted by soprano Marita Solberg, one of Norway's most promising young singers. Other eminent soloists include Solveig Kringelborn and Ingebjørg Kosmo, who join the Bergen PO and Ole Kristian Ruud on this the final disc in the team's acclaimed Grieg survey. Reviewers have focused on the familiarity of the interpreters with the music (Gramophone: 'Bergen musicians have lived with these scores since their creation and all the performances here have a relaxed, idiomatic naturalness in their virtuosity’) as well as the superior recordings, all done in surround sound and released as Hybrid SACDs (BBC Music Magazine: 'The engineering, whether heard via SACD (surround and stereo options) or CD stereo, is exemplary in every way, conveying the warm acoustic of Bergen's Grieg Hall with thrilling presence.')