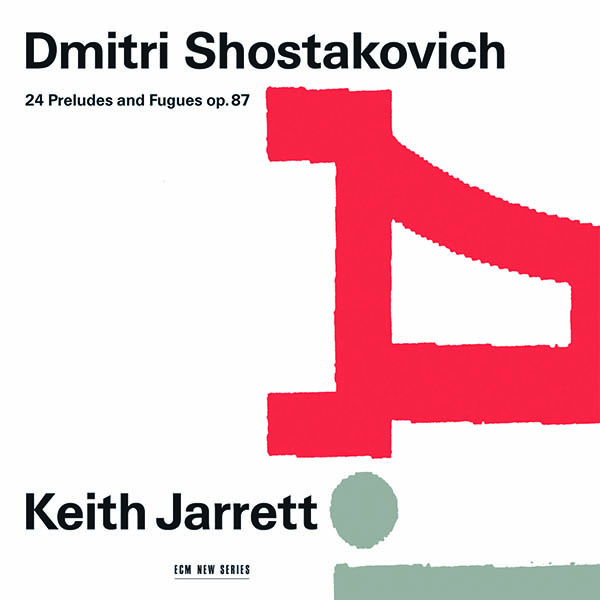 As the pianist said at the time, “When I first saw these pieces in a music shop, I knew I wanted to play them. I recognised the language. But when I started playing them, they were so close to me that I knew I had to record them.” He began including Shostakovich pieces in his recitals in 1985, alongside works by Beethoven, Scarlatti and Bach, and his Shostakovich recording followed his acclaimed account of the two books of The Well-Tempered Clavier.

There was a musical-historical logic to the choice, as well: it had been a performance of Bach’s “48” at a piano competition in Lepizig in 1950 that inspired Shostakovich to write his own cycle of preludes and fugues.

“It didn’t feel like I was playing someone else’s music,“ said Jarrett of his first encounter with the op. 87. “[The pieces] are coming from some strange quirky place that I’m familiar with. They’re not ‘pianistic’ in the traditional way...”

In the CD booklet Hans-Klaus Jungheinrich writes that “Shostakovich tried to escape the distressing historicity of the artist delinquent in his socialist-realist function by espousing the hermetic artistic realm of Bach’s counterpoint – where he could forget his painful role of the voluntary / involuntary state composer. (...) Shostakovich’s cycle offers itself as the only remake of Bach’s Well-Tempered Clavier that can be taken seriously.”

Jarrett believed that any programmatic intention that Shostakovich brought to the work dissolved in the sheer pleasure of creation and performance, the composer being also a considerable pianist. “These preludes and fugues are almost like x-rays of thought”, Jarrett told Gramophone. “I think in some of them the music just took him over. Sometimes from a studied beginning it all starts to blossom.” This is emphatically true of, for example, No 15 in D-Flat Major, whose fugue has a freely associative development which Wilfred Mellers describes as “scarily crazy as Bedlam” in its metrical dislocation. Yet its jagged trajectory will not seem unfamiliar to those who have experienced the thornier episodes of Jarrett’s Radiance for instance, or the newly released album The Carnegie Hall Concert (a New York recording of solo improvisations from September 26, 2005, missing Shostakovich’s 99th birthday by mere hours...)

As for the overall merits of Shostakovich’s Opus 87, Professor Mellers has summed them up well in the liner notes: “If there is a single work among his large output that assures us that Shostakovich is among the great composers nurtured by our bruised and battered century, this collection of Preludes and Fugues is it. One might go so far as to say that it places him among the supreme composers in any phase of Europe’s history. Listen and you will hear.”

Cap box includes a 44-page booklet with texts by Wilfried Mellers in English and Hans-Klaus Jungheinrich in German, English and French.