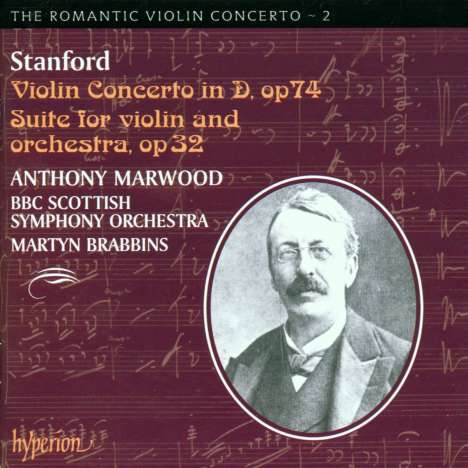 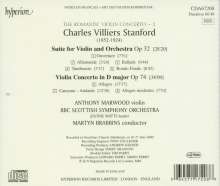 Stanford was a more-than-proficient violinist during his youth and performed numerous violin concertos as an experienced conductor. From his early years in Dublin, Stanford came to know Joachim and as Stanford grew older and his prodigious ability became more apparent, Joachim began to take a serious interest in his future. Later, while Stanford was at Cambridge, their strong artistic and personal relationship cemented.

The Suite for Violin and Orchestra was written as a homage to Joachim which would stand both as a tribute to his friend's brilliance as a great virtuoso and musician and as a portrait of his musical enthusiasms for Bach, Beethoven, Mendelssohn, Spohr and Brahms. The work was premiered by Joachim in Berlin in 1889 and was a great success. The violin concerto was composed in 1899 and first performed in 1901 with very little critical notice. This changed, however, when it was played by Fritz Kreisler. Although viewed by those such as Parry as one of his finest works, it did not establish itself in the canon of popular concertos. The work has remained virtually unknown, its passion and soul locked away in the pages of Breitkopf und Härtel's unpublished full score and parts recently discovered in the library of the RCM.

'A real find … Anthony Marwood is an inspired choice of soloist, with a silvery tone and immaculate intonation. Prepare to be enchanted, by both piece and performance' (CD Review)