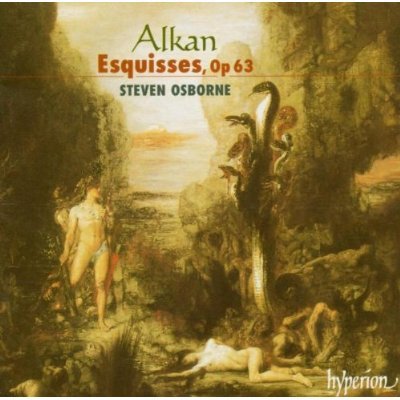 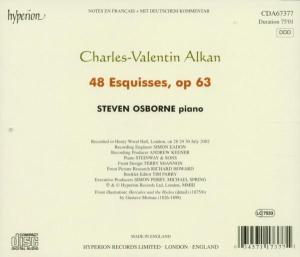 The renaissance of interest in the reclusive and eccentric 19th-century French composer Alkan has been one of the more interesting developments of the last part of the 20th century but it has usually been his massive and virtuoso works (the symphony and concerto for solo piano for example) which have made the biggest impression. Throughout his life though Alkan was also a miniaturist, as 25 Preludes and six books of Chants show, and this interest culminated in undoubtedly the greatest of these cycles, the Esquisses (sketches) here recorded. This set of 48 pieces plus a final Laus Deo runs through all 24 keys twice with the Laus Deo returning the double cycle to C major. A huge range of mood and colour is represented from simple folk song to etude, not forgetting the bizarre, as can be seen in the tone clusters of Les Diablotins or the schizophrenic Héraclite et Démocrite.

This cycle has only been recorded complete once before. With Steven Osborne applying his colour, virtuosity and interpretive insight we are confident we have produced a recording that will permanently raise the stature of these pieces in the musical world and add a significant milestone in the Alkan discography.

'This music needs a performer full of freedom, imagination and with great fingers, all of which describes Osborne … I knew that Osborne’s latest offering would be outstanding' (Pianist)

'These miniatures call for a pianist of great sensitivity, character and receptiveness to the music’s diverse, perfectly crystallised moods … Osborne is just the man … This is a revelatory disc, and one to cherish' (Daily Telegraph)