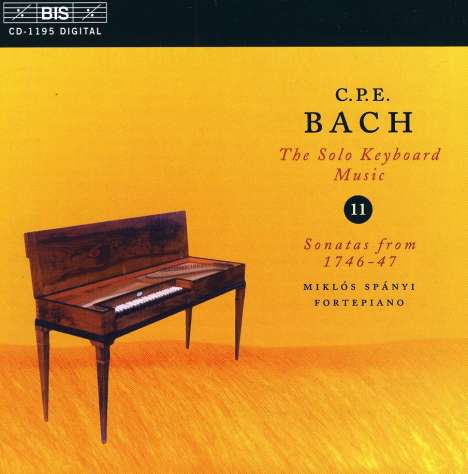 versandfertig innerhalb von 1-3 Tagen
(soweit verfügbar beim Lieferanten)
EUR 19,99*
Versandkosten
Miklos Spanyi’s ongoing survey of the solo keyboard works of C. P. E. Bach is a recording project of almost heroic proportions. Over 10 volumes so far, he has given us a large number of sonatas, suites, character pieces and other works – most of them never previously recorded! In such an undertaking, the scholarly ambitions are quite naturally high, but even more important is the enjoyment which he takes in the music, and – most importantly – which he conveys so admirably to the listener!

For this recording three rather large-scale sonatas and a fantasia have been chosen. All three sonatas were composed in the period 1746-7. They may therefore be associated with the new Silbermann fortepiano, which so pleased Frederick the Great, King of Prusssia and C. P. E. Bach’s employer, when he first heard it in 1746 that he immediately ordered several such instruments. It is thus quite logic that Miklos Spanyi has chosen to perform these works on a copy of a 1749 Silbermann instrument. Since the keyboard instrument – the possibilities are many – featured in the series up to now has been the clavichord, the present volume will give the listener yet another perspective on the mastery of C. P.E. Bach – and of Spanyi himself.

All of the works on the disc are world première recordings, and – quoting from the liner notes by C. P.E. Bach scholar Darrell M. Berg – ‘can be regarded as an overview of Bach’s early engagement with the fantasia, for all of the sonatas in the volume contain elements of that genre. Each has the long, sweeping roulades found in Bach’s unmeasured fantasias. Each has rhythmic vagaries that give it an improvisatory character.’ Definitely something to enjoy!