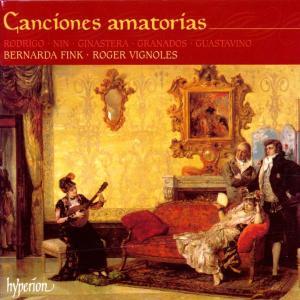 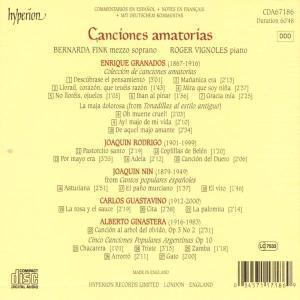 The title of this CD, taken from the Granados 'colección', means, of course, 'love songs', and that is what it is—a collection of love songs. However, whilst they are all in the Spanish language, they are not all from Spain. In honour of her birthplace, Buenos Aires, Bernarda Fink includes works which should be thought of as Pan-Hispanic rather than a purely 'Spanish', so we have, in addition to those of the Spaniards Granados and Rodrigo and the Cuban Nin, little-known songs by her compatriots Ginastera and Guastavino.

These 27 songs are ravishingly sung by this Argentinian mezzo upon whom we can bestow no higher praise than to declare our belief that she is the successor to the throne of the beloved Victoria de los Angeles. There are some pieces of music and singing here that, once heard, will not be forgotten.

'Enthusiasts for song recitals should certainly investigate this disc, which offers one beautiful song after the other, running the gamut from elegant art songs to simple, folk-like tunes' (Fanfare, USA)

'One of the loveliest mezzos of our time' (The Sunday Times)

'Fink is one of the best singers I’ve encountered in some time, and she goes a long way to making this recording the most enjoyable anthology of Spanish songs I’ve heard' (American Record Guide)