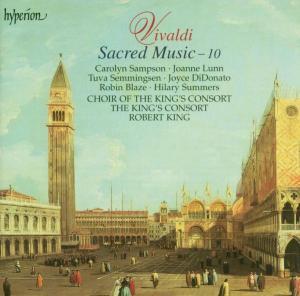 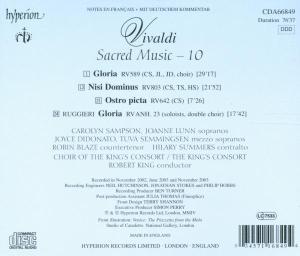 Ten years and eleven discs after its triumphant inception, Robert King’s complete recording of Vivaldi’s sacred music reaches a worthy end. The Gloria, RV589 – this is the ‘famous’ one, beloved of choral societies the world over – provides a suitably ebullient opening to a recording which also includes the lyrical Ostro picta sublimely sung by Carolyn Sampson and the Gloria by Ruggieri – the work from which Vivaldi stole many of the best ideas for his own settings of the same text.

Of great significance also is the first recording of the newly discovered Nisi Dominus, RV803 – Vivaldi’s ‘latest work’, as it were. Discovered in a Dresden library in 2003, this opulent setting is for three soloists, strings, continuo and five extraordinary solo instruments (including the fantastical ‘violino in tromba marina’ – the eighteenth century’s equivalent of the modern ‘jazz violin’?). As a historical discovery, this new work is important; as the keystone of this final disc in a ground-breaking series, it is perfect.

'So we have reached the end of a long, immensely rewarding trail. Brilliant, invigorating, uplifting, King's sacred music intégrale shines like a beacon in a dark world that has largely lost the ability to engage with spiritual celebration. More prosaically, it now becomes the core reference archive for Vivaldi's sacred music, a skilfully planned, superlatively engineered set of discs that will take an honoured place in recording history' (Fanfare, USA)

'for King's sterling service to the Vivaldian cause, one of his most important recording and satisfying projects to date, I am thankful' (Gramophone)

'The accomplished, precise and colourful orchestra is led by the ever vigourous and sensitive King, and the technically irreproachable and spot-on choir with its formidable bass section … is especially noteworthy' (Goldberg Early Music Magazine)