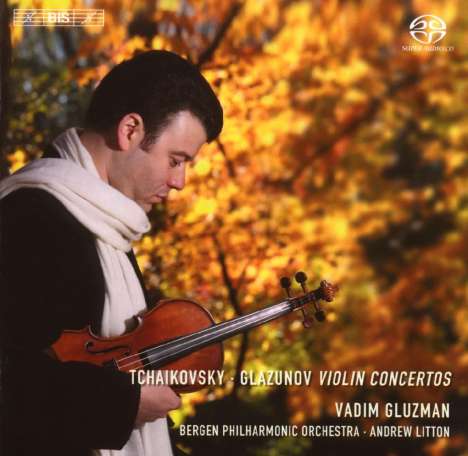 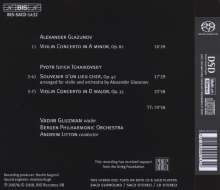 The great Russian tradition of violin playing, as exemplified by Efrem Zimbalist, Jascha Heifetz and Nathan Milstein, was largely founded by the distinguished violinist Leopold Auer, who taught at the St Petersburg Conservatory for fifty years. This disc combines two works for violin and orchestra, both to some extent composed with Auer in mind, performed by Ukrainian-born Vadim Gluzman playing on Auer's own instrument, a Stradivarius built in 1690. Tchaikovsky composed his Concerto in D major in 1878 and asked Auer to give the first performance. Auer was reluctant to do so, however, and didn't perform the Concerto until 1892, by which time it had already begun to reach the level of popularity that it has enjoyed ever since. Some ten years later, Auer was again approached in a similar matter. This time he was more amenable, and in 1905 premièred Glazunov's Concerto in A minor, at a concert conducted by the composer. Apart from having Auer as a common denominator, the two works are quite dissimilar. Tchaikovsky's Concerto is characterised by a melodic flow reminiscent of his ballet music, and remains one of his freshest works, whereas Glazunov's Concerto displays all the virtues of the composer's opulent late-Romantic style, with beautiful craftsmanship and rich orchestral colour. The two works are bridged on this disc by the three pieces collectively called Souvenir d'un lieu cher, which Tchaikovsky composed for violin and piano at around the time of the concerto. (Indeed, the first of its three movements, entitled Méditation, was originally intended as the slow movement of the concerto.) Three years after Tchaikovsky's death, Glazunov made an orchestration of the piano part. Eminent violinist Vadim Gluzman has previously released three highly acclaimed discs on BIS, all of them featuring music from the Soviet and the post-Soviet era. About »Time … and again« (BIS-CD-1392), which includes Arvo Pärt's Fratres, BBC Music Magazine wrote: »Every phrase resounds with passion and sensitivity. A really superb disc.« The same applies to this his first Concerto disc on BIS, on which Gluzman enjoys the committed support of Bergen Philharmonic Orchestra under its music director Andrew Litton, well-known for his affinity with the great Russian orchestral repertoire.