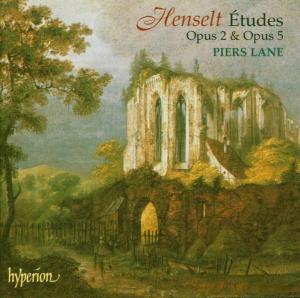 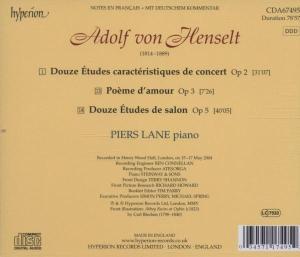 Adolf von Henselt was one of the greatest virtuosi of the nineteenth century. His trail-blazing études – at once impossibly challenging for the performer and ardently lyrical for the listener – were to influence a generation of composers, especially in Russia where Henselt settled.

Having studied with Hummel in Weimar, the ›Henselt piano technique‹ is now regarded as the link between that of the older composer and that to be developed by Franz Liszt. Notorious for his ability to play unfeasibly wide-spreading chords while maintaining a miraculous legato line, Henselt's fanatical devotion to technical pianistic exercises should come as no surprise. The two sets of études represent the codification of his diligence, yet their worth today derives as much from their musical value as their technical complexity.

Piers Lane, whose impressive discography reveals him to be something of an étude-ist himself, more than rises to the challenge.

»Lane's committment to, and affection for these difficult works is abundantly clear, and his playing is simply marvellous, bringing a kaleidoscopic range of colour and an utter solidity of technique that makes even the most taxing passages sound easy« (International Record Review)

»As in his recent CD of Moscheles for the same label, Lane has all the executive answers to these constantly – and sometimes extravangantly – demanding pieces, thoroughly characterising every idea, pianistic or musical« (International Piano)

»Piers Lane plays Henselt with the exceptional tact that marks his previous endeavours. There's no lack of acrobatic thrill; but even in the most bravura numbers, he manages to draw out the musical substance as well. His ability to separate lines – to coax the melodic core from all the ornamentation and elaboration – is especially welcome in some of the potentially heavy-breathing etudes here, works that can readily turn to clatter in less dexterous hands. Add to this Davis's scrupulous notes and Hyperion's unimpeachable sound, and you have a strong release. Warmly recommended« (Fanfare, USA)