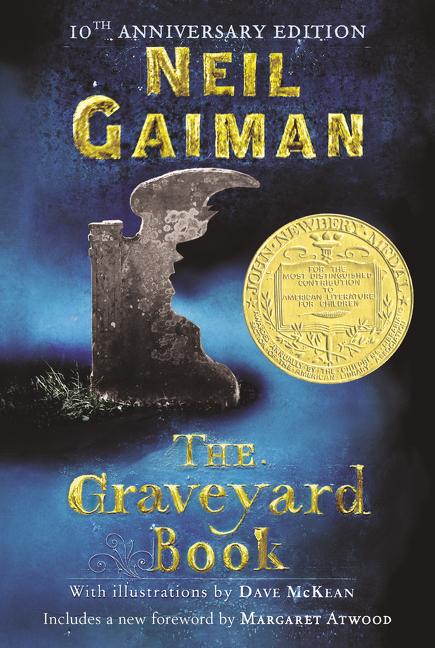 Winner of the 2009 Newbery Medal, Neil Gaiman s Nr. 1 nationally bestselling novel is an unforgettable, rich and enchanting tale of a boy growing up in the most unlikely of settings. The paperback edition has a robust EXTRAS section that includes Neil Gaiman s Newbery acceptance speech, his answers to reader s questions, and addtional illustration from Dave McKean.

Nobody Owens is a normal boy, except he lives in a sprawling graveyard and has been raised since infancy by ghosts and a guardian who belongs to neither the world of the living nor the dead. There are adventures in a graveyard for a boy - an ancient Indigo Man, a gateway to the abandoned city of ghouls, and the strange and terrible Sleer. There are dangers though too, and if Bod leaves the graveyard, he may fall prey to the man Jack, who has already murdered Bod s entire family.
Effortlessly inventive, chilling, and magical, Neil Gaiman s Newbery winning and bestselling Graveyard Book is an a classic in the making.
Illustrated by frequent Gaiman collaborator and acclaimed artist Dave McKean, The Graveyard Book is enriched by beautiful black-and-white line drawings throughout.
The paperback edition features a robust Extras section including the author s Newbery Medal acceptance speech, additional art by Dave McKean, and Neil Gaiman s answers to readers questions.

The 10th anniversary edition of The Graveyard Book includes a foreword by Margaret Atwood as well as sketches from the illustrator, handwritten drafts, and Neil Gaiman's Newbery acceptance speech. This middle grade novel is an excellent choice for tween readers in grades 5 to 6, especially during homeschooling. It's a fun way to keep your child entertained and engaged while not in the classroom.

IT TAKES A GRAVEYARD TO RAISE A CHILD.

Nobody Owens, known as Bod, is a normal boy. He would be completely normal if he didn't live in a graveyard, being raised by ghosts, with a guardian who belongs to neither the world of the living nor the dead. There are adventures in the graveyard for a boy—an ancient Indigo Man, a gateway to the abandoned city of ghouls, the strange and terrible Sleer. But if Bod leaves the graveyard, he will be in danger from the man Jack—who has already killed Bod's family.

The Graveyard Book, a modern classic, is the only work ever to win both the Newbery (US) and Carnegie (UK) medals.

Neil Gaiman is the critically acclaimed and award-winning author of novels and a collection of short fiction. Among the many awards he has won are the World Fantasy Award and Bram Stoker Award. Originally from England, Gaiman now lives in America.

Neil Gaiman
The Problem of Susan and Other Stories
Buch
EUR 17,95*