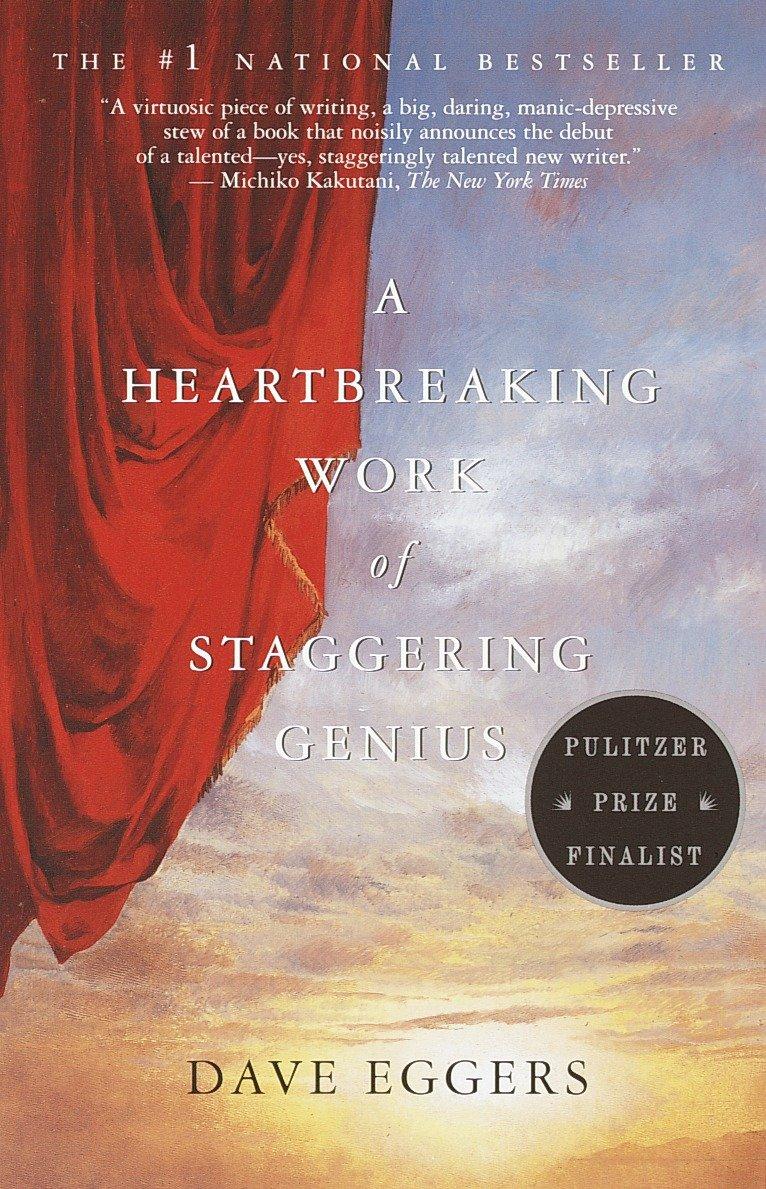 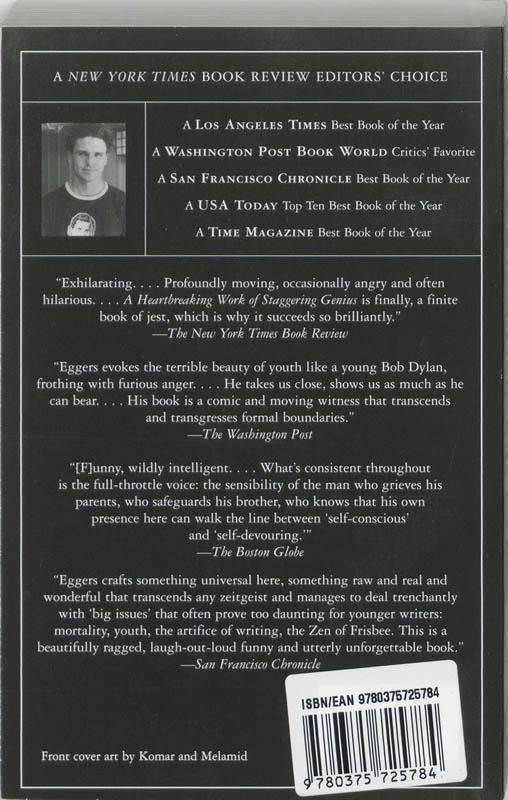 The literary sensation of the year, a book that redefines both family and narrative for the twenty-first century. A Heartbreaking Work of Staggering Genius is the moving memoir of a college senior who, in the space of five weeks, loses both of his parents to cancer and inherits his eight-year-old brother. Here is an exhilarating debut that manages to be simultaneously hilarious and wildly inventive as well as a deeply heartfelt story of the love that holds a family together.

A Heartbreaking Work of Staggering Genius is an instant classic that will be read in paperback for decades to come. The Vintage edition includes a new appendix by the author.

"A virtuosic piece of writing, a big, daring, manic-depressive stew of a book that noisily announces the debut of a talented - yes, staggeringly talented new writer." - Michiko Kakutani, The New York Times

" Exhilarating.... Profoundly moving, occasionally angry and often hilarious.... A Heartbreaking Work of Staggering Genius is finally, a finite book of jest, which is why it succeeds so brilliantly." - The New York Times Book Review

"Eggers evokes the terrible beauty of youth like a young Bob Dylan, frothing with furious anger.... He takes us close, shows us as much as he can bear.... His book is a comic and moving witness that transcends and transgresses formal boundaries." - The Washington Post

"[F]unny, wildly intelligent.... What's consistent throughout is the full-throttle voice: the sensibility of the man who grieves his parents, who safeguards his brother, who knows that his own presence here can walk the line between 'self-conscious' and 'self-devouring." - The Boston Globe

"Eggers crafts something universal here, something raw and real and wonderful that transcends any zeitgeist and manages to deal trenchantly with 'big issues' that often prove too daunting for younger writers: mortality, youth the artifice of writing, the Zen of Frisbee. This is a beautifully ragged, laugh-out-loud funny and utterly unforgettable book." - San Francisco Chronicle

"This is a beautifully ragged, laugh-out-loud funny and utterly unforgettable book."

A book that redefines both family and narrative for the twenty-first century. A Heartbreaking Work of Staggering Genius is the moving memoir of a college senior who, in the space of five weeks, loses both of his parents to cancer and inherits his eight-year-old brother. Here is an exhilarating debut that manages to be simultaneously hilarious and wildly inventive as well as a deeply heartfelt story of the love that holds a family together.

A Heartbreaking Work of Staggering Genius is an instant classic that will be read for decades to come.

Through the small tall bathroom window the December yard is gray and scratchy, the trees calligraphic. Exhaust from the dryer billows clumsily out from the house and up, breaking apart while tumbling into the white sky.

The house is a factory.

I put my pants back on and go back to my mother. I walk down the hall, past the laundry room, and into the family room. I close the door behind me, muffling the rumbling of the small shoes in the dryer, Toph's.

"Where were you?" my mother says.

"It was longer. Was something broken?"

"Were you playing with yourself?"

"I was cutting my hair."

"You were contemplating your navel."

I had not cleaned up, had actually left hair everywhere, twisted brown doodles drawn in the sink, but knew that my mother would not find out. She could not get up to check.

My mother is on the couch. At this point, she does not move from the couch. There was a time, until a few months ago, when she was still up and about, walking and driving, running errands. After that there was a period when she spent most of her time in her chair, the one next to the couch, occasionally doing things, going out, whatnot. Finally she moved to the couch, but even then, for a while at least, while spending most of her time on the couch, every night at 11 p. m. or so, she had made a point of making her way up the stairs, in her bare feet, still tanned brown in November, slow and careful on the green carpet, to my sister's old bedroom. She had been sleeping there for years--the room was pink, and clean, and the bed had a canopy, and long ago she resolved that she could no longer sleep with my father's coughing.

But the last time she went upstairs was weeks ago. Now she is on the couch, not moving from the couch, reclining on the couch during the day and sleeping there at night, in her nightgown, with the TV on until dawn, a comforter over her, toe to neck. People know.

While reclining on the couch most of the day and night, on her back, my mom turns her head to watch television and turns it back to spit up green fluid into a plastic receptacle. The plastic receptacle is new. For many weeks she had been spitting the green fluid into a towel, not the same towel, but a rotation of towels, one of which she would keep on her chest. But the towel on her chest, my sister Beth and I found after a short while, was not such a good place to spit the green fluid, because, as it turned out, the green fluid smelled awful, much more pungent an aroma than one might expect. (One expects some sort of odor, sure, but this .)And so the green fluid could not be left there, festering and then petrifying on the terry-cloth towels. (Because the green fluid hardened to a crust on the terry-cloth towels, they were almost impossible to clean. So the green-fluid towels were one-use only, and even if you used every corner of the towels, folding and turning, turning and folding, they would only last a few days each, and the supply was running short, even after we plundered the bathrooms, closets, the garage.) So finally Beth procured, and our mother began to spit the green fluid into, a small plastic container which looked makeshift, like a piece of an air-conditioning unit, but had been provided by the hospital and was as far as we knew designed for people who do a lot of spitting up of green fluid. It's a molded plastic receptacle, cream-colored, in the shape of a half-moon, which can be kept handy and spit into. It can be cupped around the mouth of a