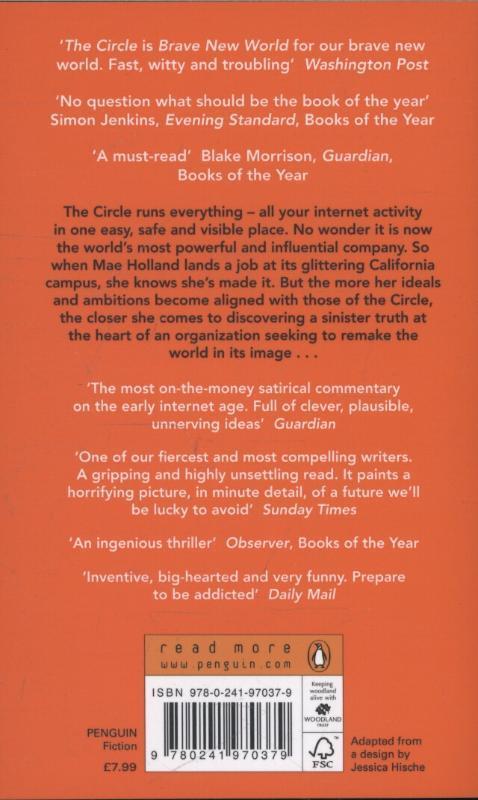 When Mae is hired to work for the Circle, the world's most powerful internet company, she feels she's been given the opportunity of a lifetime. Run out of a sprawling California campus, the Circle links users' personal emails, social media, and finances with their universal operating system, resulting in one online identity and a new age of transparency. Mae can't believe her great fortune to work for them - even as life beyond the campus grows distant, even as a strange encounter with a colleague leaves her shaken, even as her role at the Circle becomes increasingly public ...

Dave Eggers is the author of six previous books, including "Zeitoun," a nonfiction account a Syrian-American immigrant and his extraordinary experience during Hurricane Katrina and "What Is the What," a finalist for the 2006 National Book Critics Circle Award. That book, about Valentino Achak Deng, a survivor of the civil war in southern Sudan, gave birth to the Valentino Achak Deng Foundation, run by Mr. Deng and dedicated to building secondary schools in southern Sudan. Eggers is the founder and editor of McSweeney's, an independent publishing house based in San Francisco that produces a quarterly journal, a monthly magazine ("The Believer"), and "Wholphin," a quarterly DVD of short films and documentaries. In 2002, with Nínive Calegari he co-founded 826 Valencia, a nonprofit writing and tutoring center for youth in the Mission District of San Francisco. Local communities have since opened sister 826 centers in Chicago, Los Angeles, Brooklyn, Ann Arbor, Seattle, and Boston. In 2004, Eggers taught at the University of California-Berkeley Graduate School of Journalism, and there, with Dr. Lola Vollen, he co-founded Voice of Witness, a series of books using oral history to illuminate human rights crises around the world. A native of Chicago, Eggers graduated from the University of Illinois with a degree in journalism. He now lives in the San Francisco Bay Area with his wife and two children.