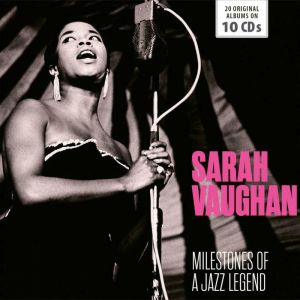 Sarah Vaughan (1924-1990) was the next big star among jazz singers after Billie Holiday (1915-59) and Ella Fitzgerald (1917-1996). In contrast to her colleagues, she had a sound musical education and was a very good pianist, which enabled her to keep up with the young Bebop musicians from the beginning.

Sarah Vaughan grew up in a very Christian family in Newark, New Jersey, as a single child. She received piano lessons from the age of 7 and took an active part in the musical life of her church, as a chorus-singer and pianist. Early on, she was also interested in the latest music she heard on the radio and on records and discovered her love for jazz. In the local music scene, she and her friends were able to experience excellent musicians, and Vaughan used every occasion for her first performances as a singer and pianist.

At the age of 18, she regularly went to New York's great ballrooms, where the world's best jazz orchestras appeared every day. At an amateur competition at the Apollo Theatre in Harlem, she impressed the singer Billy Eckstine so much that he invited her to an audition with Earl Hines, the leader of the orchestra he appeared with at the time, who immediately hired her as a second pianist and soon afterwards as the female vocal soloist next to Eckstine. In this group she met Dizzy Gillespie for the first time.

The often hard touring life did not bother her, and after Billy Eckstine founded his own orchestra in 1944, she went with him. All future star soloists of the Bebop movement, from Miles Davis via Dizzy Gillespie, Gene Ammons, Dexter Gordon to Charlie Parker, were in Eckstine's band. Her solo-career began with recordings for small labels, and she was soon signed by Columbia Records until 1953.

Her great success began with her contract with Mercury Records, where she was able to record pure orchestral productions on the one hand and straight jazz albums on the other. Sarah Vaughan's best recordings from the 50s and early 60s can be found on this CD box.