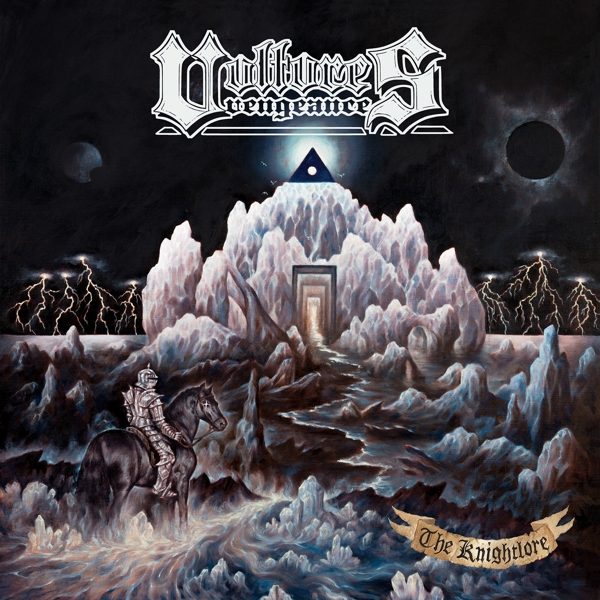 From the Italian underground comes Vultures Vengeance, a heavy epic metal quartet that defends the realm of the obscure on their first full-length album, The Knightlore. The wait is over…ten years into their career, Italian heavy epic metallers Vultures Vengeance deliver on the promise shown on their Where the Time Dwelt In and Lyrids: Warning From the Reign of the Untold EPs with their first fulllength The Knightlore.

Tony T. Steele formed Vultures Vengeance in 2009 with rather earnest intentions. Simply put, he wanted to assemble a band of like-minded people who had the same passion for classic and somewhat obscure heavy metal as he. From there, they would write original material, record albums and play live shows in their native Italy and across Europe. However, Steele, who serves as the band’s vocalist and lead guitarist, encountered the usual lineup turnover the befall younger bands, making him even question whether Vultures Vengeance would have a career to call their own. Undeterred, Vultures Vengeance finally made their way into the studio in 2015 to record their debut demo, Rising.

The wait and occasional tumult proved to be worth it for Vultures Vengeance — Rising caught fire in the European metal underground, engrossing fans and critics alike. The ensuing Where the Time Dwelt In (2016) and Lyrids: Warning From the Reign of the Untold (2018) EPs helped further establish Vultures Vengeance and their deft blend of obscure, epic heavy metal and venerable NWOBHM as a favorite in the burgeoning classic metal scene. Now, the time has arrived for the band’s first ever full-length collection of songs, The Knightlore. Recorded at Nation’s Eye Studio by bassist Matt Savage, The Knightlore consists of eight tracks of diverse and challenging epic metal. Vultures Vengeance (who are rounded out by co-lead guitarist Tony L.A. and new drummer Matt Serafini) have not only captured the spirit found on their first two EPs, they have expanded upon it.

The album’s eight songs provide the band the perfect platform to showcase their penchant for storytelling and sterling songcraft, with their seasoned gallop, Steele’s impassioned delivery and flurry of melodic, diving leads encompassing a sound that is right in the wheelhouse for fans of Cirith Ungol, Manilla Road and Mercyful Fate. Now well past having to convince listeners they can properly re-create the hallowed sounds of the ’80s without sounding contrived, Vultures Vengeance has made good on the promise shown on their first two EPs. The Knightlore is a testament to the bold, brave and daring.