Venetian Snares: My Love Is A Bulldozer 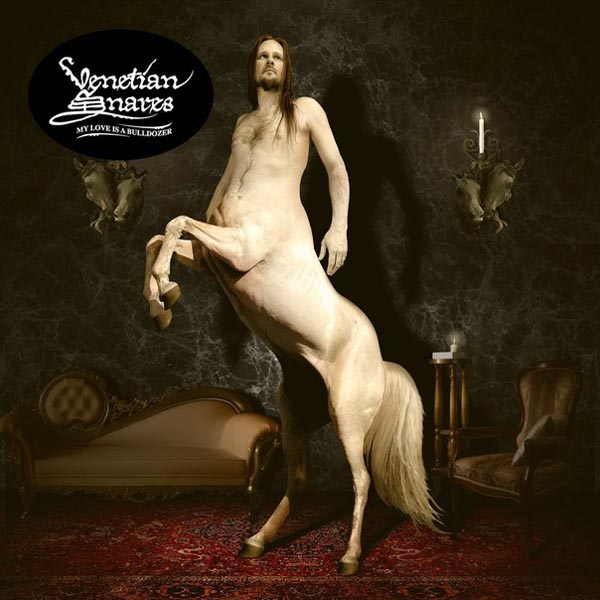 Aaron Funk surprises yet again, drawing on new ideas and on moods that have only been touched upon in his previous work. The album seems to have a flowing sense of narrative, something akin to an opera, and unusually Aaron sings songs on it, which reinforces the sense of an emotional journey.

Right from the start it's clear we're in new territory, with the distressed and violent '10th Circle Of Winnipeg', featuring a world weary jazz singer intoning deep emotional loss between crashing breaks and a corkscrewing bassline, giving us a sense of bewilderment and hurt, whereas 'Deleted Poems', all mournful strings and flamenco guitar, evokes empty desolation. '1000 Years' is the first time we hear Aaron's romantic singing with its orchestral accompaniment, coming across with a slightly medieval quality, cut up dramatically with angry fitful drum programming.

On 'Your Smiling Face' Aaron's voice is both lamenting and slightly manic over an empty downbeat drums and piano, switching quickly in mood to the cartoony rush of 'Amazon'.Title track 'My Love Is A Bulldozer' is as close as Snares gets to a pop song, with its gothic, self-deprecating vocals and dark synth melodies, but this is quickly splintered apart by rushing drumwork and metal stabs leaving you breathless. 'She Runs' sees things get warmer and more romantic, with epic chords and building, fidgety drums, rushing closer and closer in anticipation towards the end as if they're speeding towards a destination. 'Too Far Across', drops back to sparse, lonely lyrics, the vocals yearning to see a distant lover, over sad plucked guitar.

'Dear Poet' is an epic track that starts by working up strings and brass into shivering shapes cut with violent stabs, before amens drop in and the orchestral work becomes a dramatic accompaniment, the melodies darting across the deftly programmed drums. 'Your Blanket' finishes off the album, cold, beatless and balletic, gently building some light into the string arrangements, before the track finally forms together with bombastic brass, suggesting a potentially positive end.