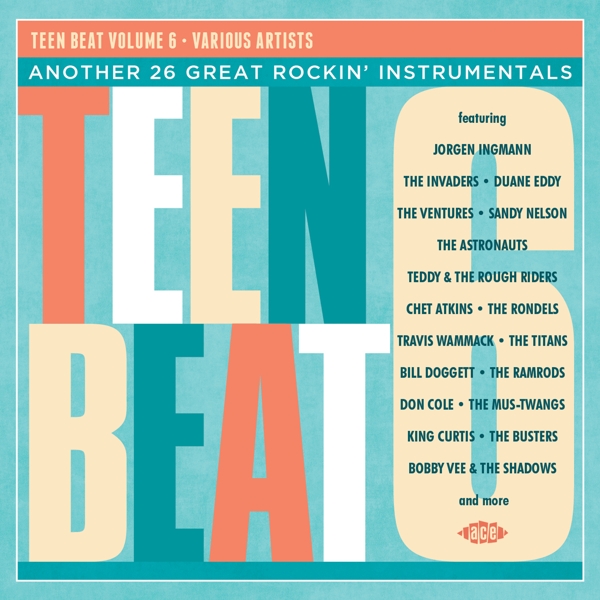 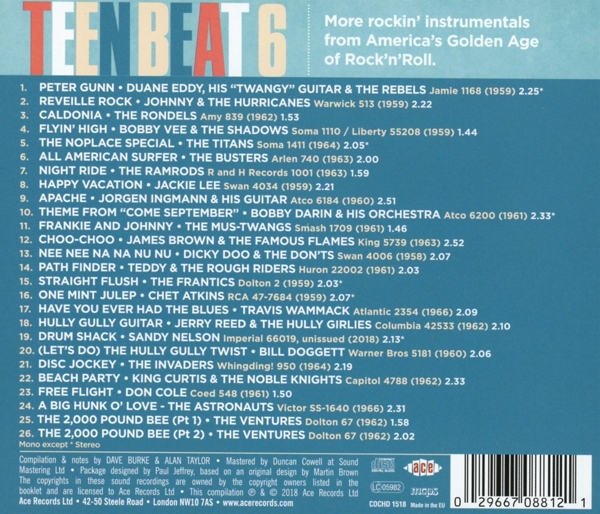 - How time flies when you’re having fun. Believe it or not, it’s been 18 years since the last volume in this muchloved instrumental series was issued. Sticking to the maxim »if it ain’t broke don’t fix it«, here on »Teen Beat Volume 6« we have adhered to the proven winning mix of top-class classics, hits and rarities, with the odd surprise thrown in.

- Rock instrumental classics do not come any greater than Duane Eddy’s »Peter Gunn’ or Johnny & the Hurricanes« »Reveille Rock«, which get the compilation off to a flying start. Less well known are the Rondels’ riotous assault on »Caldonia«, which rocks like there’s no tomorrow, the Busters’ thrilling »All American Surfer« and the Ramrods’ glorious »Night Ride«, a totally authentic wedge of surf – even though the band came from Alabama.

- When it comes to rarities we have two definite aces up our sleeve. Sandy Nelson’s »Drum Shack« is so rare that we were not even sure it really existed until we got the master in our hot little hands, while the Astronauts’ »Big Hunk O' Love« was issued in 1966, but never beyond Japanese shores.

- Other obscurities include the Invaders’ »Disc Jockey« which is as clever as it is calculating (what DJ could resist?), the Mus-Twangs’ rock-up of »Frankie & Johnny« featuring Paul Cotton of Poco when he just wanted to be Duane Eddy, Don Cole’s exhilarating guitar work on »Free Flight« and the Titans’ »Noplace Special«, which is actually a very special place indeed.