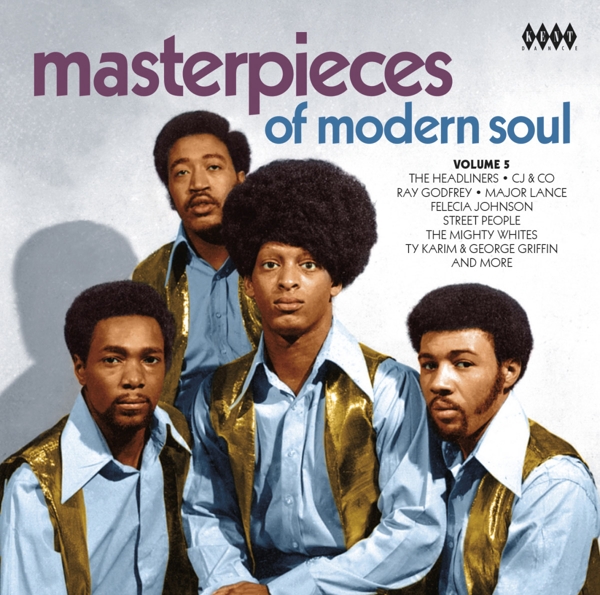 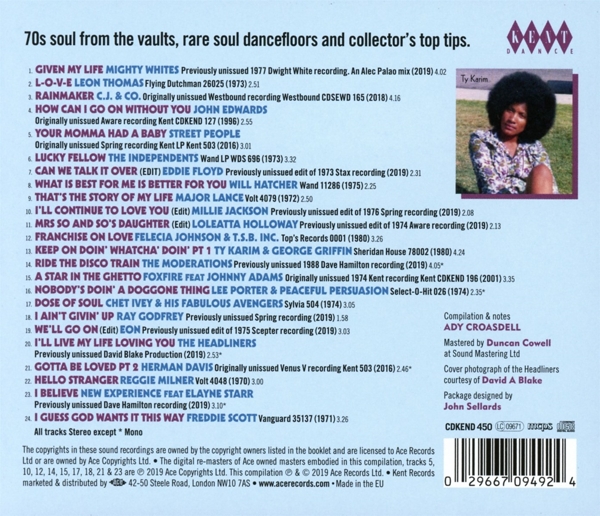 - Masterpieces is back with a cross-section of all that’s good on the Modern Soul scene.
- Full of exclusive gems like the Mighty Whites’ unreleased master ‘Given My Life’ from Los Angeles which would eventually see life in an inferior recording by Brotherhood on MCA in 1978. It’s been played on acetate across Europe and is widely admired. A more modern version of ‘Rainmaker’, as popularised on Kent LPs in the 80s, is featured by Detroit’s C. J. & Co. and that city also provides a fabulous groove on ‘Ride The Disco Train’, a never-heard-before secular update of the ever-popular Tolbert Family gospel 45.
- Jazzman Leon Thomas reminds us that Northern Soul clubs weren’t all baggies and spins with his everpopular shuffler ‘L. O. V. E.’, while Major Lance’s ‘That’s The Story Of My Life’ is a 70s record that features the best of the classic soul sound. Millie Jackson’s ‘I’ll Continue To Love You’ also belies its release date, in this case 1976 but sounding almost 1969; fast feet needed here. Some social commentary features on Lee Porter’s now in-demand Memphis waxing ‘Nobody’s Doin’ A Doggone Thing’.
- Dave Hamilton’s Detroit stable takes us into the 80s with the little-known Felicia Johnson cut ‘Franchise On Love’ and New Experience’s unissued ‘I Believe’. A surprise sleeper is Will Hatcher’s ‘What Is Best For Me Is Better For You’ which has been overshadowed by its brilliant flip ‘Who Am I Without You Baby’; this comes close to matching it after a few plays – a real grower. There’s a brand-new version of ‘I Ain’t Giving Up’, the song Ray Godfrey wrote for both Joe Simon and Millie Jackson, by the man himself, and Part 2 of Herman Davis’ two-stepper ‘Gotta Be Loved’ debuts on CD.
- A terrific mix of sounds from the early 70s right through to the 80s; as a collection they are irresistible.