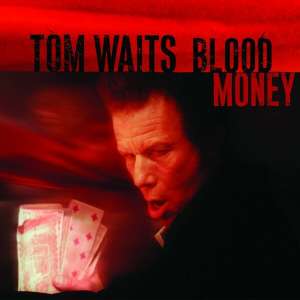 Blood Money is based on the socio/political play "Woyzeck," originally written by a young German poet Georg Buchner as a spare, cinematic piece in 1837 and inspired by the true story of a German soldier who was driven mad by bizarre army medical experiments and infidelity, which led him to murder his lover. Waits, along with wife and collaborator Kathleen Brennan, wrote songs for an avant-garde production of "Woyzeck" directed by Robert Wilson, which premiered in November 2000 at the Betty Nansen Theater in Copenhagen and went on to win Denmark's version of the Tony for Best Musical. The album careens from the brutal to the tender with assaulting rhythms and romantic melodies. It's a grim musical deposition on the human condition, a dark mortality play where Tin Pan Alley meets the Weimer Republic."Blood Money is flesh and bone, earthbound," said Waits. "The songs are rooted in reality: jealousy, rage, the human meat wheel...They are more carnal. I like a beautiful song that tells you terrible things. We all like bad news out of a pretty mouth. I like songs to sound as though they've been aging in a barrel and distressed." (tomwaits.com)