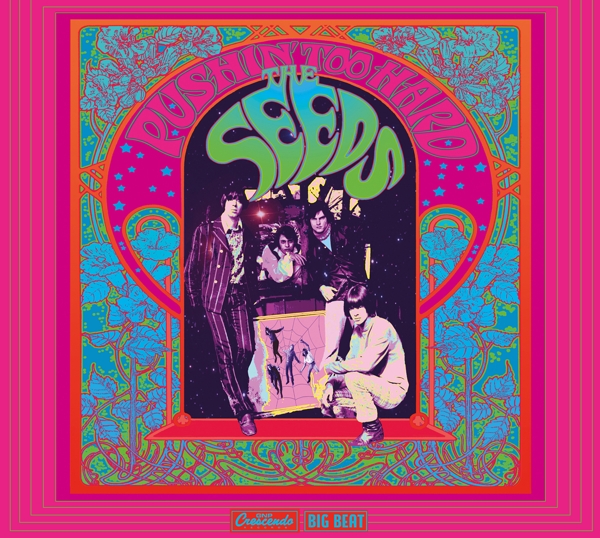 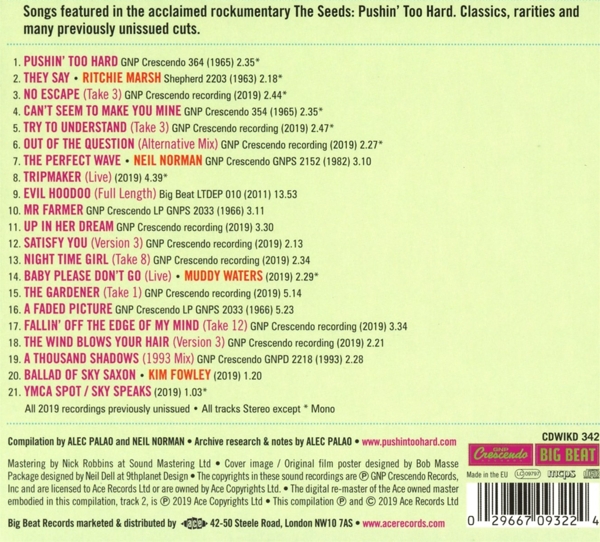 Bewertung:
lieferbar innerhalb 1-2 Wochen
(soweit verfügbar beim Lieferanten)
EUR 15,99*
Versandkosten
*** Digipack
Big Beat’s series of reissues dedicated to the Seeds reaches its apex with the compilation “Pushin’ Too Hard: The Seeds”, the accompanying soundtrack to an acclaimed rockumentary tracing the rise and fall of these 60s garage icons.

Directed by GNP Crescendo’s Neil Norman and written / produced by Ace’s own Alec Palao, “Pushin’ Too Hard: The Seeds” is an extensive trip through the career of the exemplary quartet, and its eccentric frontman, Sky Saxon. The frequently off-centre tale is told via extensive interviews with members of the band and their retinue, vintage footage, rare photos and memorabilia, and insights from Seeds fans such as Iggy Pop, Bruce Johnston of the Beach Boys and the Bangles.

While it contains the expected signature tunes from the Seeds’ catalogue such as ‘Can’t Seem To Make You Mine, ‘Mr Farmer’ and of course the title cut, “Pushin’ Too Hard: The Seeds” also features many rare sides such as an early Sky single under the name Ritchie Marsh, an exciting excerpt from the band’s 1967 appearance at Hollywood Bowl and, as a nod to the Seeds’ friendship with Muddy Waters, a vintage live cut from the venerable bluesman. Aficionados will be glad to note that several of the group’s own selections are presented here as alternate takes or different versions, providing more evidence of the driving, hypnotic brand of rock’n’roll the Seeds pioneered.

As always, detailed notes on the contents and many rare illustrations complete the package. The release of the soundtrack coincides with the first European screening of “Pushin’ Too Hard: The Seeds”, scheduled for London in the spring of 2019.