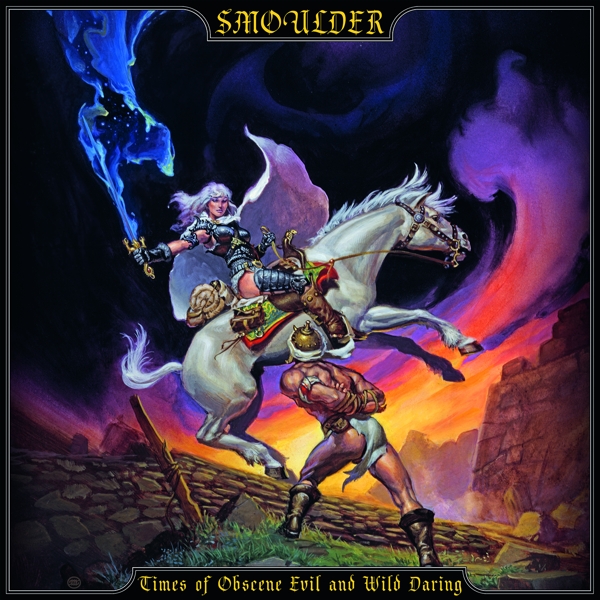 First full-length from firebrand Canadian quintet that escapes into realms of fantasy, glory and heroism, all under the banner of epic doom and power metal! Buoyed by the success of their The Sword Woman demo comes Smoulder, a Canadian epic doom/power metal quintet who combines obscure metal savvy with brilliant storytelling on their first full-length, Times of Obscene Evil and Wild Daring. An impromptu jam session at a house party was all it took to light the fire under Canadian metal aficionados Sarah Ann and Shon Vincent.

The two shared a fondness for doom bands such as Reverend Bizarre, Lamp of Thoth and Solitude Aeternus, utilizing this synchronicity to throw around ideas that while crude, were the foundation for what was to come. Originally, Sarah was on drums; Vincent on guitar and vocals, resulting in the name Smoulder, as in “smouldering ruins.” After doing the perfunctory check on Metal Archives to ensure the name wasn’t taken, Smoulder was forged in 2013. Smoulder’s first few years was slow-going, though, as the two struggled to find reliable bandmates in their hometown of Calgary.

The pair relocated to Toronto in 2017 and came to the realization Sarah would be better off singing and Vincent should concentrate solely on guitar. Faced with the high costs of a rehearsal room and delaying the band for another year so they could afford space, Sarah and Vincent reached across the border to Illinois to secure the services of Collin Wolf (guitar) and Kevin Hester (drums). Shortly thereafter, Smoulder trekked into the studio to record their debut 2018 demo, The Sword Woman.