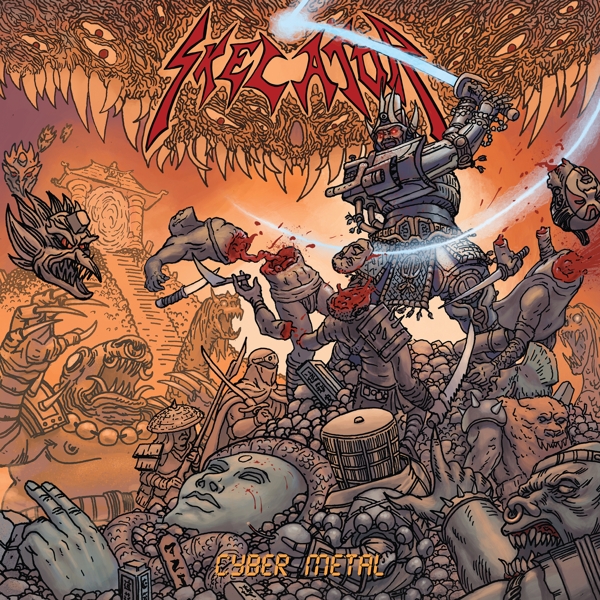 “No songs about swords — unless they are laser swords.” Such was the rallying cry and lyrical framework Skelator vocalist Jason Conde-Houston developed for the band’s fifth studio album and first for Gates of Hell Records, Cyber Metal. Recognizing there currently is no shortage of bands singing about swords and the glory of wielding one, Conde-Houston dug deep into his 1980s comic and movies collection for inspiration and “nerd-out” lyrics. The resultant “Akira,” “Highlander” and “Seven Scars” rank among some of the band’s most anthemic in a career that now spans over 20 years.

Recorded throughout 2018 between a variety of studios, including drums with Cody Brumlow at Hangar 12 in Mountlake Terrace, Washington and vocals with Matt Roach at Rain City Recorders in Vancouver, British Columbia, Cyber Metal received its finishing touches courtesy of the guitar duo of Robbie Houston and Rob Steinway. It was this attention to detail – not to mention long, grueling hours at Houston and Steinway’s home studios – that has given Skelator (who are completed by drummer Pat Seick and new bassist Darin Wall) their best-sounding record to date. While the production may be polished, the songs are steely and brash, stocked with Conde-Houston’s rangy vocal exploits and NWOBHM-inspired riffing, continuing the thread of pure-metal excellence that started with the band’s 2008 Give Me Metal or Give Me Death debut.

The album’s cover – in pure western comic/role-playing-game tabletop style – was created by Seattle-based Two-Headed Giant. Reflecting the album’s designated title track, “Cyber Samurai,” the cover finds a hero surrounded by a horde of goons and villains, somewhat reminiscent of the band’s 2005 Swords EP.

Twenty-plus-years of playing metal has taught Skelator quite a bit, most notably how to keep the band more professional and less personal. While the band’s early days were sometimes fraught with arguments over songwriting and arrangements, Skelator has now settled into a comfortable working relationship, one that focuses on the end result over individual contributions. It shows on Cyber Metal, which is unabashedly Skelator’s most ambitious record to date and one sure to further introduce them on a worldwide scale.