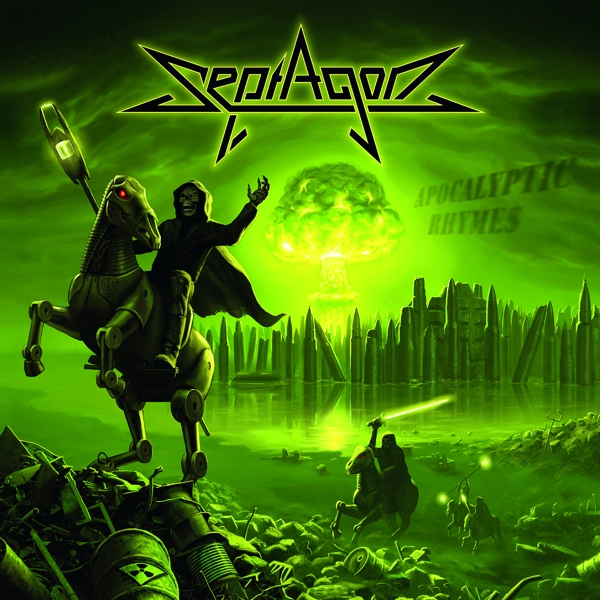 Thrash and power metal unite like never before in a socio-political firestorm that tests the mind and bangs the head. - Featuring members of Atlantean Kodex, Lanfear and Them, Septagon pushes subgenre boundaries with technical, yet catchy songs on Apocalyptic Rhymes that are rife with dashing melodies and stellar vocal interplay.

As if being in Lanfear and Them wasn’t enough for German guitarist Markus “Ulle” Ullrich, his power/thrash outfit Septagon provides another canvas for him to color. Formed in 2013 with Atlantean Kodex vocalist Markus Becker, Septagon (who are completed by second guitarist Stef Binnig-Gollub, bassist Alexander Palma and drummer Jürgen "General" Schrank) was created to harness Ullrich’s desire to write fast and tight thrash with a vocalist who could carry the songs over the top.

Becker, already known for his work in epic metallers and labelmates Atlantean Kodex, was the obvious choice. Born was their 2016 Deadhead Syndicate debut, an album quickly recognized for its knifing blend of Bay Area thrash and classic power metal bravado. Figuring they could better the debut, Septagon soon wrote and recorded ten songs that would become their sophomore album, the appropriately-titled Apocalyptic Rhymes.

Septagon
We Only Die Once (Limited Numbered Edition)
LP
EUR 23,99*