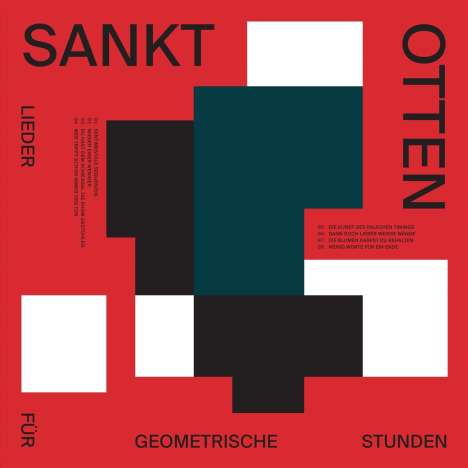 Everyone knows these moments, hours or days, where one is feeling cornered, it is like running in circles or one is just trying to see something from a different angle.
The new album by Sankt Otten - "Lieder für geometrische Stunden"("Songs for geometrical hours") - offers tracks for these kind of scenes. It's the soundtrack of the ups and downs of life and everyone's entirely personal geometrical hours. A very gentle and meditativ sequence introduces us to this new creation. Is it a synthesizer or a guitar? Whatever! A floating pad passes and returns, layers and shapes are rising. At the end the interaction of man and technology merges into perfect harmony. We are heading monumentally towards a futuristic world, which is frigid and surreal with a monotonous, sometimes gloomy and dark mood. Also beautiful.

"Du hast dem Schicksal die Show gestohlen" ("You upstaged fate") by contrast comes along with a minimalistic attitude. To some extent, sounding like rock music without being rock music. It's the perfect intersection of Minimoog sequences, acoustic drum sounds, ebow guitars and synthetic strings. Conny Plank would approve. "Wer trifft schon immer den Ton" ("Who always hits the mark"): A rhythm of nested patterns, a subtle arrangement, gentle choirs, pauses, compaction and thinning. Is this already jazz? Greetings from the echo chamber. The machines are trying hard. They deform the beat into geometrical forms, the bass jumps in circles, covering the tracks with ghostly choirs, creating an illusive, cuddly dreamworld. By the way, it's a long time ago, that rototoms have been heard in electronic music. Great! "Dann doch lieber weiße Wände" ("I'd rather have white walls"), the secret hit on the album? "Die Blumen darfst Du behalten" ("You can keep the flowers"): The pause is breathing, constantly wrapped in the elapsing tone of the night. A guitar in a slow-motion dialog with a synthesizer. Finally both burned up within the interstellar space. That shoud be a title for the next Blade Runner movie.

This exactly 45 minute-long album fits on a C90 cassette side and thus closes properly with warm, analog 80's electronica. Man and machine are going hand in hand, infused by a hypnotic, motor function 808 beat, encouraging everyone to head-nodding by being almost danceable. Again, the central theme of this release is definitely the minimal, repetitiv drum play of Stephan Otten, whereas Oliver Klemm's ebow guitar drones hovers the tracks through this album. Sankt Otten do not disappoint.

Founded in 1999, the duo from Osnabrück releases since 2009 on Denovali. With their 11th release, they give us a gem of timeless instrumental music. The holy trinity of krautrock, ambient and contemporary electronica, but always sophisticated and unique Sankt Otten. The mastering of the album was made by New York-based Rafael Anton Irisarri. Also the cover layout shows their great taste once again. This outstanding punch artwork was created by graphic designer Daniel Castrejón.