Ravensire: A Stone Engraved In Red 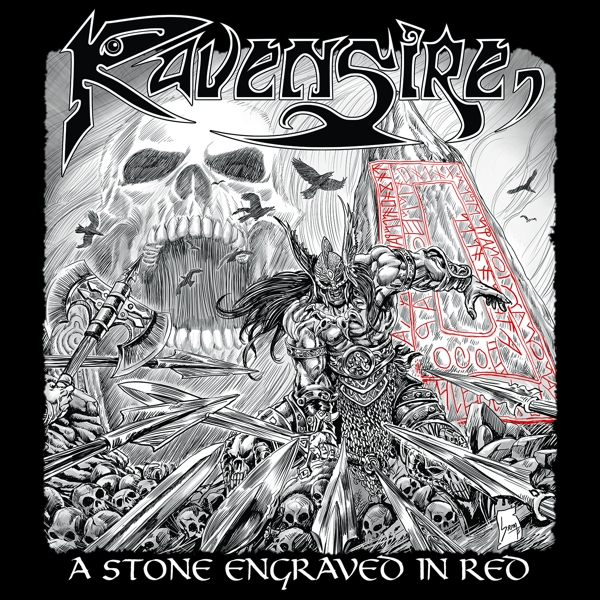 Timeless traditional metal from the heart of Portugal - including a memorable tribute to fallen Manilla Road leader Mark “The Shark” Shelton.

Ravensire’s quest for global metal prominence continues on their third full-length effort, A Stone Engraved in Red, an album of might, spirit and will - dedicated to Mark “The Shark” Shelton and Hartmuth “Barbarian Wrath” Schindler.

Geographic isolation - even during the Internet age - can be a prime deterrent for a band looking to make their presence known on an international scale. The obstacles are many, in particular, lack of funds to travel in order to build a global fanbase. But, nothing worth having is ever easy, just ask one of Portugal’s leading metal exports, Ravensire. Since their 2011 formation, the band has steadily been putting a dent into continental Europe, including spots at the Riddle of Steel and Up the Hammers festivals. The proof is in the response: Ravensire is regularly hounded by concertgoers to return - a sign that their brand of epic traditional metal is connecting with audiences. Now with two full-lengths, two EPs and two splits under their belts, Ravensire takes the next logical step forward with their third album, A Stone Engraved in Red.

Recorded at Studio 13 in Lisbon with engineer Paulo “Paulão” Vieira at the helm, A Stone Engraved in Red finds Ravensire expanding upon the songwriting prowess found on their acclaimed 2016 The Cycle Never Ends full-length. Traditional Ravensire elements like charging guitar riffs, mountainous lead segments and the impassioned delivery of bassist/vocalist Rick are present, but this time, the band (who are rounded out by the guitar team of Nuno and Mário and drummer Alex) has added new moods and dimensions to their songs. Acoustic passages, complex arrangements and a new degree of melody and flair in the guitar solo department from Mário has enhanced cuts like “Procession of the Dead” and “A Stone Engraved in Red,” capitalizing upon the album’s theme of “perpetuity” that was driven by Rick’s background as an archeologist.

A Stone Engraved in Red is also dedicated to Hartmuth ‘Barbarian Wrath’ Schindler - a longtime friend and supporter of Ravensire who is currently in a vegetative state with very slim hopes of ever recovering. While it would appear Ravensire carried a heavy heart into the making of the album, their ingrained perseverance and dedication to metal rises above all. The band had one goal when recording A Stone Engraved in Red: Create music that will stand the test of time. Mission accomplished.